Brooks Koepka reveals why he didn't text back Tiger Woods

Brooks Koepka has shed light on why he didn't return Tiger Woods' text message about a practice round. 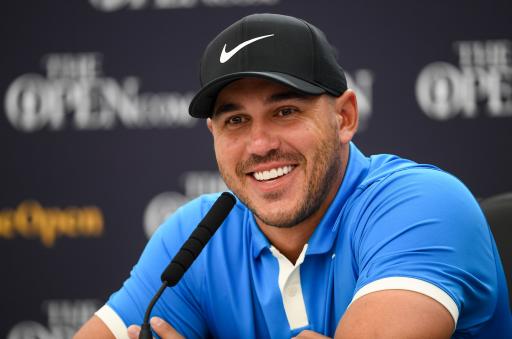 Brooks Koepka is in the hunt for his fifth major title and is one of the favourites to win the 148th Open at Royal Portrush. Speaking to Sky Sports after his first round on Thursday, he revealed the truth behind the rumours of him not texting back Tiger Woods.

Speaking to the media on Tuesday, Tiger Woods revealed that he sent Brooks Koepka a text message asking if he'd like to join him for a practice round at Royal Portrush before the start of the Open.

Woods had never played Royal Portrush before so was seeking some proper practice with a player who is hot in form when it comes to majors at the moment, especially considering that fact that Koepka's caddie is a member of the 148th Open venue in Northern Ireland.

"I said, 'Hey dude, do you mind if I tag along and play a practice round?'" Woods told the media of his message to Koepka. "I've heard nothing."

Koepka had already made it clear that having Ricky Elliott on the bag this week was an advantage to him, saying: "He knows his spots to miss it, the spots to come in from. I’ll definitely have a little bit more confidence having him on the bag this week, knowing this golf course so well.”

Many people believed that Koepka was keeping his cards close to his chest and ignored Woods so that the 15-time major champion couldn't get in on the local knowledge of Koepka's caddie, but it seems that wasn't the case.

Koepka finished the first round of this year's Open in typical Koepka style, shooting three under par, leaving him in T3 and just two shots off the lead, making him one of the big favourites to go onto win the last major of the year, with Rory McIlory out of contention after a disastrous round of eight over.

Speaking to Sky Sports after his round, Koepka was asked to shed some light on the text situation with Tiger and the four-timr major winner was more than happy to clear things up.

"I changed my phone number, that was the problem," said Koepka. "I changed it after the U.S Open when somebody leaked it, so I changed it on Monday night.

"I don't get that many texts and I didn't let many people know obviously. I mean we don't text that often and I didn't get any of his text messages, but I texted him on Wednesday and gave him my new number and he text me back so don't worry. We're good."