Bryson DeChambeau's new speed and power once again proved successful as he claimed the Rocket Mortgage Classic in Detroit. 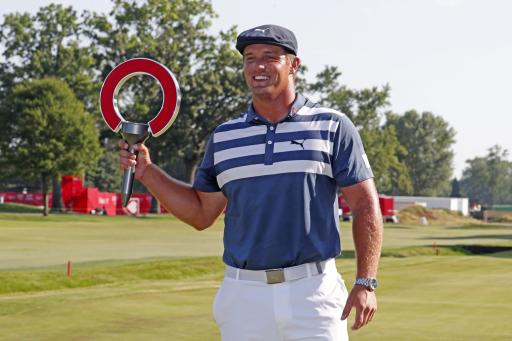 Bryson DeChambeau shot the round of the day on his way to claiming the Rocket Mortgage Classic in Detroit.

Using his new speed and power to his advantage once again, DeChambeau averaged a driving distance of 350.6 yards as he beat the overnight leader Matthew Wolff by three shots.

DeChambeau birdied his final three holes en route to a 65 to finish the tournament at 23-under par.

Wolff, who went into Sunday three shots better than DeChambeau, got off to a poor start, making the turn at 2-over par, before adding another bogey to his scorecard at 10.

The 21-year-old made up for it with four birdies in his last eight holes to finish 1-under for the day, but the early mistakes cost him greatly and allowed the in-form DeChambeau to capitalise.

DeChambeau birdied his opening hole and added three more to shoot 32 on the front nine and the American found another birdie at 10, before making his only bogey of the day at the par-5 14th.

Finishing in style with three consecutive birdies, DeChambeau fist pumped as his ball dropped into the hole at the last, his first victory in 20 months.

DeChambeau now has six PGA Tour victories to his name and has won every season for the past four years.

After adding a serious amount of muscle mass to his body over the past few months, DeChambeau has been using his new power to his advantage and since the PGA Tour returned after its 91 day absence, he has been the most consistent player on the tour, finishing T3, T8, T6 and 1st in the last four tournaments.

NEXT PAGE: Jim 'Bones' Mackay will caddie for Matt Fitzpatrick on PGA Tour