DeChambeau responds after Fitzpatrick claims "it's not a skill to hit the ball a long way." 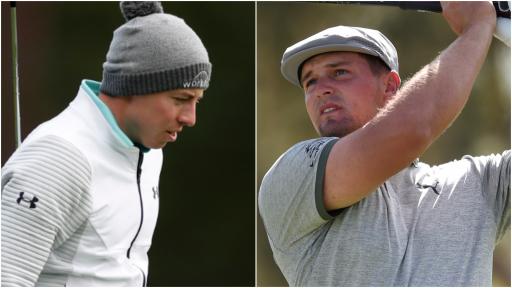 We can't be certain Bryson DeChambeau's response had anything to do with Matt Fitzpatrick tumbling out of contention at the BMW PGA over the weekend, but it probably had something to do with it.

Fitzpatrick hit the front at Wentworth on Friday and then directed some pretty outrageous comments towards newly-crowned US Open champion DeChambeau.

"In my opinion, it’s not a skill to hit the ball a long way," said Fitzpatrick. "I could put on 40 pounds. I could go and see a bio-mechanist. I could gain 40 yards; that’s actually a fact. I could put another two inches on my driver.

"But the skill is to hit the ball straight. That’s the skill. He’s just taking the skill out of it in my opinion. I’m sure lots will disagree. But it’s just daft."

After hearing Fitzpatrick's comments, DeChambeau responded calmly but disagreed with the Englishman's points of view.

"I appreciate that comment," said DeChambeau, who finished tied eighth at the Shriners Hospitals for Children Open on Sunday.

"It's a compliment to me honestly. A year ago, I wasn't hitting in anywhere near as far as I am today. It took a lot of work, a lot of hours to work through the night to figure out a lot of this stuff.

"I would say it actually takes more skill to do what I'm doing, and albeit I may have - my fairway percentages are a little bit down, I still believe I'm hitting it straighter than what I was last year with the distances that I was hitting back then.

"So I actually appreciate those comments. I think he's looking out for certain set of players, and I appreciate that."

He added: "I would love to have a conversation with him [Fitzpatrick] about it and say, 'Hey, man, I would love to help out. Why couldn't you do it, too?' You see Rory and DJ doing the same thing, too.

"They're seeing that distinct advantage, and I feel like it's great for the game of golf. I don't think it takes less skill."

Fitzpatrick, who shared the 36-hole lead with Shane Lowry at the BMW PGA, ended up shooting a 76 the following day to fall out of contention only to recover on Sunday with a 69 to finish tied seventh.