DeChambeau has a mare on the par-5 15th as he misses the Memorial cut on 5-over par... 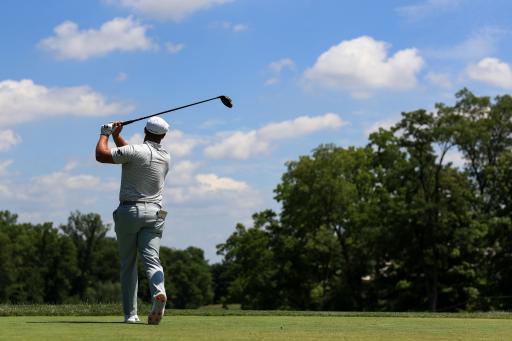 Bryson DeChambeau endured his worst ever score on one hole as a PGA Tour golfer after making a disastrous 10 on the par-5 15th en route to missing the halfway cut at the Memorial Tournament.

DeChambeau won the Rocket Mortgage Classic in his last start and had made seven consecutive top-10 finishes heading into this week at Muirfield Village.

After a lacklustre 1-over 73 on Thursday, DeChambeau got back to level par for the tournament after going out in 35 strokes on Friday afternoon, but then disaster quickly struck around the turn.

Two bogeys were exchanged with two birdies on the first four holes of the back nine, and then DeChambeau added another bogey at the 14th taking him back to 1-over par for the tournament.

On a score that was still enough to make the weekend, DeChambeau tried to push things on the par-5 15th and quickly came unstuck as he sent his tee shot into the water.

He then sent his third shot way to the right for another penalty stroke, before doing similar with his fifth stroke leading to a third consecutive penalty stroke.

Here's a clip of DeChambeau putting forward his case to a rules official that his ball was still in bounds, despite it resting under a fence...

DeChambeau then sent his seventh stroke on the hole into the rough, and then chipped onto the green as he two-putted for a 10 to take him to 6-over par for the tournament.

As you can see from the video below, DeChambeau had difficulty just remembering how many strokes he had taken...

Tag this friend !! @brysondechambeau is all of us trying to remember how many shots we hit that hole lol. Friend: “Ummm I think I got a 6. ” Me: “ But you were hitting 6 from 124 out of the rough” lol #memorialgolftournament #pga #pgatour #brysondechambeau #tigerwoods Via : @vegasjay

He went on to birdie the final hole, however, DeChambeau would miss the cut on 5-over par.

DeChambeau's caddie was also spotted blocking the cameraman with his golf bag late on the back nine, a move that comes just two weeks after DeChambeau grilled a cameraman for following his every move in the bunker...

It marks DeChambeau's first missed cut on the PGA Tour since the Greenbrier in September 2019.

Tony Finau and Ryan Palmer share the 36-hole lead heading into the weekend on 9-under par, with Jon Rahm one stroke back on 8-under par.

Gary Woodland lurks three strokes off the pace alongside Luke List and Chez Reavie, with a resurgent Jason Day another stroke back on 5-under par.

Rory McIlroy is seven strokes back on 2-under par, while Tiger Woods narrowly made the cut on 3-over par following a disappointing 4-over 76.