Bryson DeChambeau tries to stretch the rules at WGC

Social media reacts to DeChambeau looking to stretch the rules on day one of the WGC-FedEx St Jude Invitational... 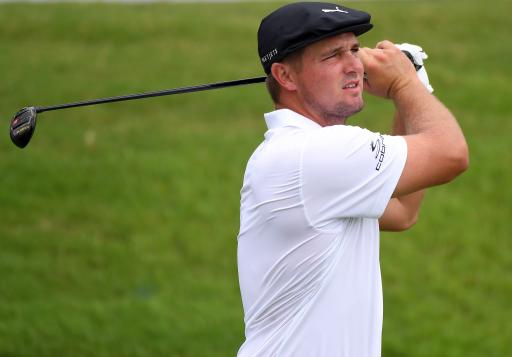 Bryson DeChambeau appeared to try to stretch the rules of golf on the 7th hole on day one of the WGC-FedEx St Jude Invitational, and it was met with outrage on social media.

DeChambeau struck a wild drive on his 16th hole (the 7th hole at TPC Southwind) and his ball ended up behind a couple of sticks. When he arrived at his ball, he saw a red ant and tried to gain a free drop upon calling over a PGA Tour rules official.

GolfMagic spoke to PGA Rules Official Ashley Weller, and upon watching the incident he said: "Bryson has become a parody of himself."

Unfortunately for DeChambeau, despite his lengthy argument with the PGA Tour rules official, he was well away from a free drop ruling and had to continue playing his second shot from where the ball had finished.

It was quickly met with shock among those in the Sky Sports commentary box with Robert Lee and Andrew Coltart bewildered as to how DeChambeau could even ask for such a ruling.

DeChambeau went on to make a double-bogey six on the hole, but would go on to birdie his final hole and finish at 3-under par for the round.

Bryson wants a drop because of a red ant

He is the worst pic.twitter.com/lRd2j44xMn

One golf fan tweeted: "Bryson DeChambeau is trying to get relief from a dangerous animal hole ... because his ball is behind a stick and he saw an ant. An ant. This crap has to be exhausting for @PGATOUR officials at the #WGC."

Another tweet read: "To me, Bryson is losing the science part and trying to overpower holes with his strength. His new frame is clashing with his old mindset."

One golf fan wrote on Twitter: "Bryson was basically trying to cheat #antman"

PGA Tour
How much Kevin Kisner and others won at the PGA Tour's Wyndham Championship
PGA Tour
Abraham Ancer won HUGE MONEY at the WGC-FedEx St Jude Invitational
Golf news
Manchester United players tee it up at St Andrews ahead of Premier League season
PGA Tour
"HE'S THE GOAT": Dustin Johnson on spending time with Wayne Gretzky
The Open Championship
Collin Morikawa: BURGERS were the secret to my Open win!