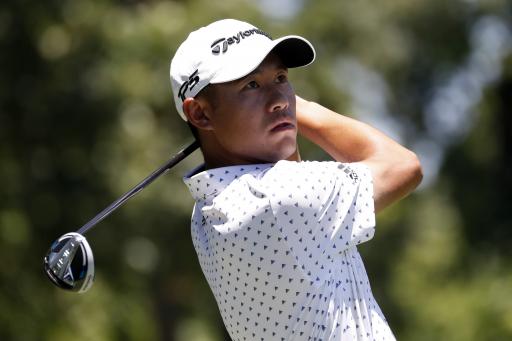 America's rising star Collin Morikawa took early control of the Workday Charity Open, the first of back-to-back events at Muirfield Village, with a superb 7-under 65.

Morikawa, 23, posted an eagle and six birdies to reach 8-under par but then failed to get up and down from sand at the last en route to his sole bogey of the day.

"I kept going and felt good throughout the day. Hit some good tee shots, gave myself lots of good chances and played some really solid golf."

Morikawa also spoke of his admiration for Jack Nicklaus' Muirfield Village, having seen it for the first time this week.

"It helps to hit a fade on a lot of these tee shots," he said. "Previously before I'd even stepped on the course, people said this is going to be a good course [for Morikawa]. You never know until you get here and play, but I just fell in love with it when I first saw it on Tuesday."

“I think my little cut shot fits nicely to a lot of these holes.”

So nice that @Collin_Morikawa is the leader after Round 1 at the Workday Charity Open. pic.twitter.com/KVuJ7lucdx

The Las Vegas resident, who won the Barracuda Championship last year, saw his incredible cut streak since turning professional come to an end at the Travelers Championship two weeks ago.

Morikawa finished with 22 consecutive made cuts, which was the second-longest streak to start a PGA Tour career to the record 25 cuts made by Tiger Woods.

"That's where I want to be, I want to be that consistent player who gives himself opportunities down the stretch on the weekend, and have a chance to win," said Morikawa.

"I thought when I turned pro I would be able to do that, but it's been a learning curve, and I am learning every day. I just want to slowly inch myself up there."

Canada's Adam Hadwin sits one stroke behind Morikawa on 6-under par, with Japan's Hideki Matsuyama a further stroke back on 5-under par alongside American trio Nick Taylor, Zach Johnson and Aaron Wise.

Elsewhere, Phil Mickelson raced out the blocks with a 32 on the front side but then stumbled home in 41 shots to finish 1-over par for the day.

He did, however, hit the biggest drive of the day at 17 when crushing his ball 394 yards down the fairway. Watch the video above for the shot.