Collin Morikawa joins Tiger Woods, Jack Nicklaus and Rory McIlroy as the youngest winners of the PGA Championship at the age of 23. 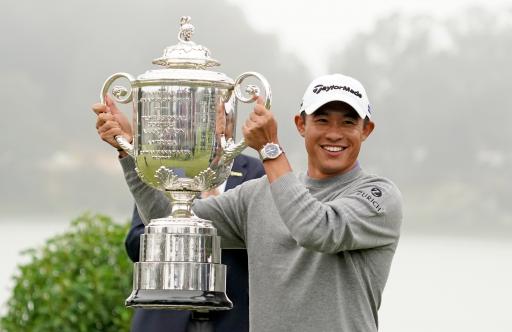 Collin Morikawa clinched his first major title in his first ever start in the PGA Championship with a two-stroke victory over Paul Casey and Dustin Johnson at TPC Harding Park.

Morikawa, who was competing in just his second career major, joins Tiger Woods, Jack Nicklaus and Rory McIlroy as the youngest winners of the PGA Championship at the age of 23.

The talented American carded a joint low-round-of-the-week 64 to finish on 13-under par for the tournament and two strokes clear of Johnson and Casey.

"It's amazing, it's been a life goal as a little kid to win a major championship," said Morikawa. "To finally close it off in San Francisco, pretty much my second home, it's very special."

Morikawa hit the shot of the week, and arguably the entire season, when sending his tee shot in to six feet at the par-4 16th and he duly rolled it home for an eagle to move two strokes clear with two holes to play. Watch the shot above.

A two-putt par followed at the par-3 17th, and after splitting the centre of the fairway at the par-4 18th, Morikawa sent his approach shot into 15 feet before two-putting for par and his maiden major title.

The only blemish of his day was dropping the lid when he went to lift the famous Wanamaker Trophy in the air...

Collin Morikawa found out the Wanamaker Trophy is not one piece the hard way pic.twitter.com/l086nB8DOR

The victory marks Morikawa's third PGA Tour title in just his 28th professional event and vaults him up into the world's top 10 for the first time in his career.

Morikawa's tee shot at 16 was one that runner-up Casey admits deserves to win any major championship.

"I played great golf this week, but Collin thoroughly deserves this win," said Casey. "That tee shot he hit at 16 was just incredible. You just have to tip your cap at a shot like that."

Casey added: "I am very, very happy. It's been a strange week, missing the fans, and it was a joy to play with Brooks Koepka. He is a gent and that really helped me out there today."

Matthew Wolff, Jason Day, Bryson DeChambeau and Scottie Scheffler tied for fourth on 10-under par, with Justin Rose back on 9-under par.

Brooks Koepka was bidding to make history and win the PGA for a third consecutive year, but his challenge evaporated quickly in the final round and he went on to card a dismal 74 to finish down the field in 29th place on 3-under par.