Dad pretends to be hit by golf ball in HILARIOUS prank

One golfer was in for a bit of a shock when he went looking for his ball and found it in this man's back garden. 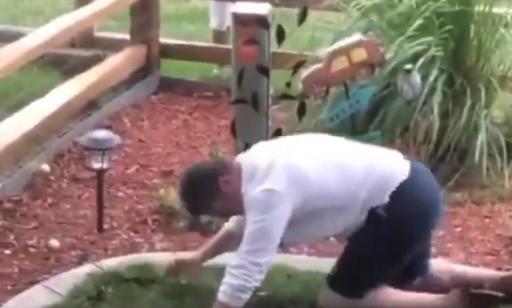 If you're lucky enough to own a home where your garden connects to a golf course, you're probably used to having a few balls landing next to you whilst you're sat outside enjoying some sun, so why not have a little fun with it from time to time?

This Dad was filmed by his daughter pranking a golfer whose shot went a little wayward and found its way into the family's back garden and it seems he likes to pull off this prank whenever possible, but this one was caught on camera and it was hilarious. Watch the epic prank in the video below:

If only we could hear what the poor golfer was saying as he must have wanted the ground to swallow him up, approaching the fence and seeing a man sprawled out on the floor holding his head.

From the video it seems as though the pranking Dad likes to trick as many golfers as possible but going by his daughter's laughter in the background, the one caught on camera was either the first or one of the best, either way, it was most definitely a moment of genius by this prank king.

NEXT PAGE: Junior golfer chunks his shot so bad the club is left in the ground!