Davis Love III lucky to be alive after house fire

Former Ryder Cup captain Davis Love III and his wife are lucky to be alive after their entire house burned down in minutes. 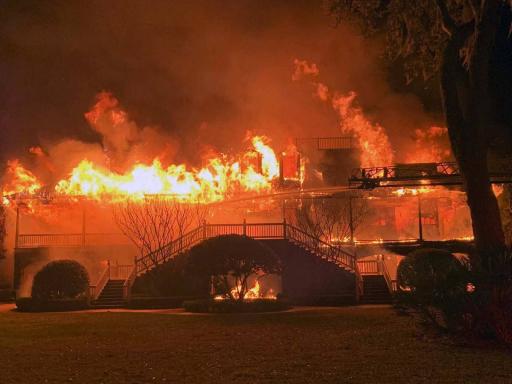 An investigation has been launched after 2016 Ryder Cup captain Davis Love III and his wife were lucky to escape their home alive, as their Sea Island mansion in Georgia burned down in minutes.

In the early hours of Friday morning, the coastal home caught fire and an emergency call was made to the fire department at 5:18am.

The emergency services acted quickly, arriving just five minutes later at 5:23, but due to the intensity of the fire, the house was beyond saving.

RK Jordan, Chief of the Glynn Country Firefighter precinct said: "The house was gone upon our arrival."

The fire was so intense that it took 16 firefighters, three fire engines, a tanker truck and three rescue vehicles to put out the flames.

Luckily, Davis Love III and his wife were able to quickly escape before it was too late, but the married couple are lucky to be alive.

Davis Love III, 55, took to Twitter to make a statement after the incident.

“While everyone in our family is saddened at the loss of our home that was filled with so much laughter and incredible memories, we’re very blessed that everyone is safe and unharmed," said Love.

Equipment Reviews
Golf Betting Tips: Sahith Theegala to bounce back at John Deere Classic?
Golf Betting Tips: Sam Burns to secure fourth win of season at Travelers?
“We’re very thankful to the first responders who made a valiant effort to save our home, and we’re keeping things in perspective as people across our community and around the world are struggling with the current unprecedented health crisis.

“We've been proud members of the St. Simons Island / Sea Island community for many years and will continue to be for many more. We appreciate all your thoughts and prayers and your respect for our privacy.”

In 2016, Davis Love III led the United States to a 17-11 victory over Europe at Hazeltine. The American also won 21 PGA Tour events throughout his career and in 1997 won his only major championship when he claimed the US PGA Championship at Winged Foot Golf Club in New York.