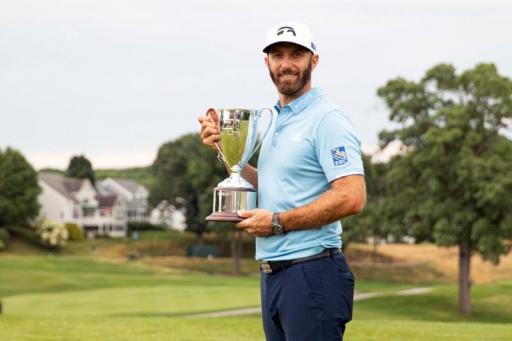 Even a weather delay couldn't throw Dustin Johnson off his game on Sunday, as he claimed his 21st PGA Tour victory by winning the Travelers Championship at TPC River Highlands.

Play was suspended due to a threat of lightning in Connecticut during the final round of the Travelers Championship, but Johnson showed exactly why he's won so many times on the PGA Tour by keeping his cool to get the victory over the line.

Johnson shot a 3-under par final round of 67 to beat Kevin Streelman by one shot, whilst overnight leader Brendon Todd's chance of winning for the third time this season came to an end with a triple-bogey seven at the 12th.

The World No.3 found four birdies and one bogey on the front nine, making the turn in 32 at 3-under, before adding another birdie at the 10th.

It looked as though Johnson had allowed the chasing pack back in it when he sent his ball out of bounds from the tee at the par-5 13th, but a seven-foot clutch putt limited the damage to a bogey and in typical DJ fashion, the 36-year-old bounced back with a birdie at the next.

Only needing a hybrid for the short par-4 15th, Johnson found trouble again when he pulled his tee shot towards the water hazard, but with a stroke of luck, his ball planted into the rough.

Johnson had to take his shoes and socks off to get into the water and play his next shot, which he left short of the green. Johnson looked destined to drop another shot but he showed his class, chipped it close and tapped it in for an important par save.

A wild par for @DJohnsonPGA.

He'll hold a 2-shot lead with 3 to play when play resumes.#QuickHits pic.twitter.com/g65tTBgHuf

Play was then suspended for an hour due to a weather warning and when Johnson returned to the par-3 16th, he put his tee shot straight into the bunker and walked away with a bogey, halving his lead to just one.

Streelman needed to birdie the last to put Johnson under some pressure but couldn't find the all-important 3 he was looking for, allowing Johnson to par his way into the clubhouse and win the tournament.

It was Johnson's first victory since the WGC-Mexico Championship in February last year and his 21st on the PGA Tour. The win also means Johnson's incredible streak of winning every year since he started on the PGA Tour in 2008 continues.