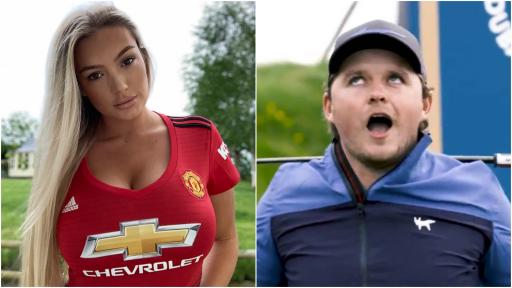 Eddie Pepperell might be one of the world's greatest golfers in 2019, but he is also one of the most outspoken. So his response to model and Manchester United fan Lucy Nicholson on Twitter today should probably not surprise many.

Nicholson posted a tweet saying: "What scares you the most," with two images of her in her Manchester United home shirt.

Pepperell replied in the only way he knows how.

Never change, Eddie. Check out the tweet exchange below...

what scares you the most? pic.twitter.com/W4MANW5uFo

The 20-year-old rookie was also playing in her first big golf tournament outside of her home nation.

Shibuno took a two-stroke lead into the final round but was soon caught by Lizette Salas, who posted the week's lowest round of 65 to finish on 17-under par.

Despite a four-putt double-bogey at the third hole, Shibuno bounced back superbly on the back nine with five birdies, showing no signs of nerves on the closing holes - particularly at 18.

With Salas already in the clubhouse on 17-under par, Shibuno required a birdie-three at the final hole to win and she duly did so when draining a 18-foot putt for her maiden major title.

South Korea's World No.1 Ko Jin-young finished two strokes back of Shibuno, with the United States' Morgan Pressel back in fourth.

"I still feel like I'm going to vomit," said Shibuno, walking off the 18th green.

"I was more nervous on the front nine but I was OK on the back nine. I felt like I was going to cry on the 18th but the tears didn't come out."

Shibuno not only wowed the British fans with her impressive golf game, but also with her infectious smile that has earned her the nickname the "smiling Cinderella."

Her manager Hiroshi Shigematsu also added yet more intrigue by claiming he "dresses up to make her smile."

On Saturday, Shigematsu wore a Samurai warrior outfit with a bluge wig and a plastic sword. He then mixed things up for the final round by wearing a clown mask.

Shibuno, who collects a whopping new prize cheque for winning the Women's British Open of £540,000, becomes only the second Japanese player to win a major championship after Chako Higuchi at the 1977 Women's PGA Championship.