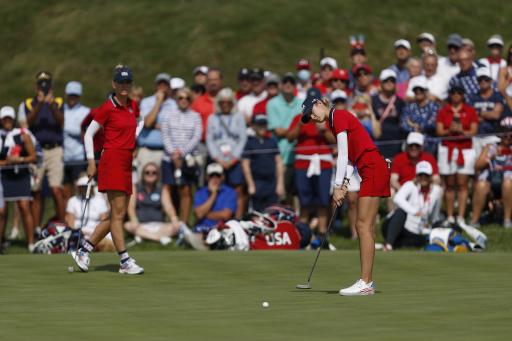 Europe raced into a commanding 5.5-2.5 lead over the United States on day one of the Solheim Cup despite a controversial ruling benefiting World No.1 Nelly Korda.

America's Korda hits a putt for birdie on the 13th hole that settled on the right edge of the cup, but Europe's Madelene Sagstrom was penalised after she picked the ball up too early - and thus Europe lost the hole.

Korda and Ally Ewing went on to win their afternoon fourball match by one hole.

"I know what I saw but wanted confirmation and I got it," tweeted rules official Missy Jones.

"Ruling was correct and made after confirmation. Very black and white rule."

Sagstrom told Jones: "But it was never going to go in. It was not hanging on the hole. Can we get TV to look at it?"

"I personally don't agree with the decision of the ball being on the edge but I didn't follow the 10-second rule. It sucks right now because I feel like I let my team down."

Madelene Sagstrom was involved in a controversial incident during the opening day of the Solheim Cup.

If any part of a player’s ball overhangs the lip of the hole:

Europe won the Friday Foursomes 3.5-1.5, and drew the Afternoon Fourballs 2-2 to maintain a three-point advantage heading into the second day.