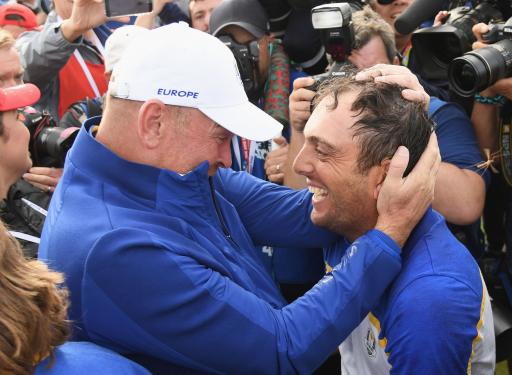 Thomas Bjorn's European side have won the 2018 Ryder Cup with a commanding 17.5-10.5 victory at Le Golf National, Paris.

The result also continues United States' horror record on European soil with their last victory away from home coming in 1993.

Despite a mini fightback from United States in the opening singles matches, Europe rallied strongly in the middle section and it was fitting that Francesco Molinari, who went 5-0 this week, should clinch the victorious point with victory over Phil Mickelson.

Molinari becomes the only player in one season to win a major and take all five points from a Ryder Cup.

"This means more to me than even the major," said Molinari.

"It's been an incredible week. Obviously they had their strongest team ever and we all played so good."

Sergio Garcia may have taken a bit of stick for receiving a wildcard, but he repaid the faith Bjorn showed him by taking care of Rickie Fowler 2&1 - a point that sees him overtake Sir Nick Faldo as Europe's all-time points scorer with 25.5 points.