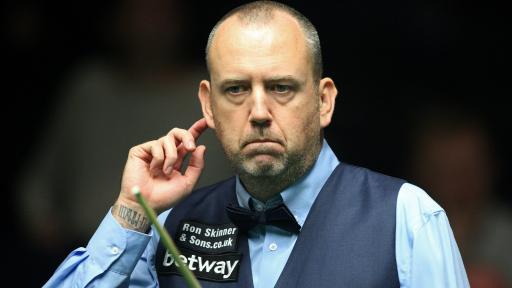 Snooker ace Mark Williams might not have danced in front of a giant flag to get his point across, but he has followed his Welsh compatriot in Real Madrid footballer Gareth Bale by claiming he would much rather be found on a golf course than playing his own professional sport.

Williams, who won his third World Snooker Championship in May 2018, is currently ranked third in the world despite not winning a ranking event.

The 44-year-old, nicknamed the 'Welsh Potting Machine', was speaking to the BBC after beating Scotland's Fraser Patrick 6-2 in the first round of the UK Snooker Championship in York.

"I really struggled but somehow he struggled more than me and made it easy for me on a couple of frames," Williams told BBC Sport.

Then the Welshman was questioned about what he has made of his season to date.

"It's going alright, I'm enjoying myself when I'm on the golf course," said Williams.

This little man is always in @markwil147 corner cheering him on, today the roles are reversed #CaddyDaddy Kian playing in his 1st golf final @WalesMiniMaster @TheCelticManor Good luck to all #it’sallinthehips #getinthehole pic.twitter.com/qMYL35OntY

But what about your snooker, Mark?

Right , back to the practice table . #aintgotmygolfclubswithme

Williams now awaits the winner of Thursday's match between Michael White and Fergal O'Brien, but he doesn't expect to progress too much further in the competition at the York Barbican over the next two weeks.

"It's going to be a struggle," said Williams. "I've got no expectations. If I play like that in the next round, I'll get beat and I'll be home on Sunday or Monday."

Williams spoke about retiring from the sport in a BBC interview back in 2017, which you can read here.

A year later he went on to wrap up his third World Snooker Championship with an 18-16 victory over John Higgins.

Williams was seen sharing sweets during that week, and even followed through with a bet that he would do his final press conference completely naked.

Wales footballer Gareth Bale is another high-profile sportsman who has expressed his desire to play golf over football, especially over playing for his club Real Madrid.

Bale has not only commented he would rather be on a golf course than a football pitch, but he also gave his approval to his new 'Wales, Golf, Madrid' song which is regularly sung during Wales matches.

Golf news
Olympic Golf: Australia's Fraser leads by one
Equipment news
Marcus Fraser: In the bag
US Open
US Open
Khan bounces back by qualifying for US Open
Golf news
Fraser to defend after freak injury