Fowler is excited to see Woods back on the course, and is also please he is fit and healthy for his family. 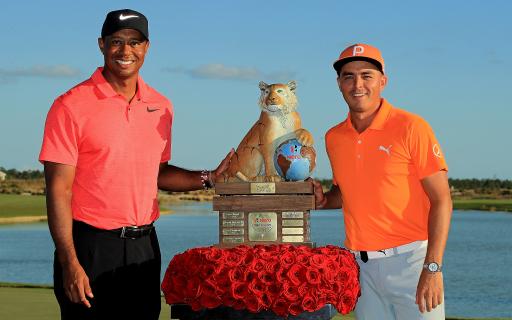 The California natives live close by in Jupiter, Florida, and have struck up a friendship.

"I didn't get to see him a whole lot when he was in a lot of pain, just because he wasn't out much, Fowler said.  "He would be basically laid up and sitting at the house and really couldn't move and do much.

"I would hear about it and be checking in on him and kind of seeing when he might be back up and putting or chipping.

"I was trying to in a way kind of keep him motivated. But I was excited for him to get back so we could start playing and practicing together back home in Jupiter.

"And to see what he's been through with the multiple surgeries and for him to be back out healthy, it is great for all of us players and the game.”

Woods’ impressive form following injury has impressed everyone, including himself, and the gates have rocketed with him back inside the ropes.

But while Fowler enjoys seeing Woods back on the course, he is also pleased for Tiger’s family.

Fowler added: “We're all excited, and I'm just happy that he's healthy and able to play the game and having fun with it.

"But also with his kids, Sam and Charlie, and getting to chase them around. He may not be running as much with Sam, but at least he can play around and have a good time with them and not be laid up on the sidelines."

Woods plays with Tommy Fleetwood and Marc Leishman in the opening rounds of the Masters, while Fowler is paired with Rickie Fowler and Matt Kuchar.

Previous
Masters 2018: opening round tee times
Next
Justin Rose: GolfMagic's No.1 Tip for the 2018 Masters