Cassie Holland is taking TikTok by storm - check out her latest video post on a golfer chunking shots in front of her. 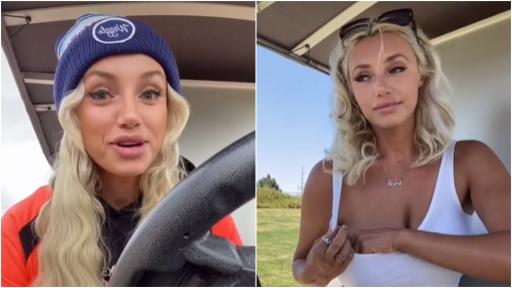 When it comes to golf cart girls, few do a better job at making tips on the course than TikTok sensation Cassie Holland (@CassHolland).

Holland works regularly at a golf course in Las Vegas and she has just shy of 1 million followers on the social media platform.

In one of her latest posts, Holland shares a hilarious story about a recent tournament in which one golfer wanted Cassie to watch him play his shot. Only it didn't end very well.

Cassie also reveals that despite what many golfers may think, golf cart girls could not care less where a player hits their shot.

Cassie also spoke about how they were giving away a free set of clubs for a hole-in-one in the tournament, which she could not quite understand given if you made an ace then surely your clubs already work perfectly fine?

Good point to be fair.

"I'm out here on the golf course a little later than usual today as the weather wasn't great," said Cassie.

"Anyway, these golfers are extra and they believe they need new clubs when they don't.

"On the subject of golf clubs, I thought I would share a little interaction.

"So aside from what people think that the cart girls are watching your every move and that we are judging your swing, we don't. We don't care.

"I usually just look away so they don't mess up. But this one guy specifically asked me to watch him so I'm like okay.

"So he goes to hit it and just chunks it. I mean, took a chunk out the ground and the ball went a few inches. Awkward.

"Then what does he do? He goes to his golf bag and switches for a different club. As if it was the club's fault? It wasn't.

"He tries to hit again, and it's still not good. Then he says it's because I'm making him nervous.

"I'm like okay then I won't look. He's using every excuse except for the fact he just plain stinks. Alright you're cute but let's get it together.

"However, time is money and I've been waiting a while so he agreed to buy some drinks from me. He's a beer guy so he asked me for four beers and I let him know that we have a six-pack special.

"I said yeah there's no difference in price but it's just special when you get it from me.

"Long story short, you might want to keep your eye on the ball and not the cart girl."

NEXT PAGE: LUCY ROBSON GOES AFTER PAIGE SPIRANAC ON INSTAGRAM