Heather MacRae says focussing on playing golf is aiding her battle with cancer. 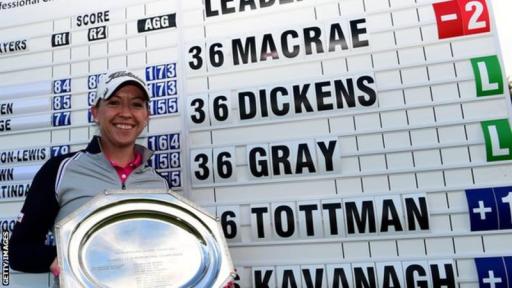 This is what golf is all about. Giving you something to look forward to and take your mind off of the daily battles we all have in life and for Heather MacRae, playing golf is helping her in her fight against cervical cancer.

Heather MacRae, 35 years old from Scotland, will be competing at Newmachar alongside male professionals at the Tartan Tour's Northern, just a week before she has the second course of surgery.

"The last few weeks have been so busy and that's the way I wanted it to be like," she said. "I don't want to think about 14 June or what happens after."

MacRae is doing everything she can to make sure she is "not giving myself much time to sit and think about it".

"I figure I'll have four, five, six, seven weeks to sit and do that," she told BBC Scotland.

"I have this tournament and then I have another one next week and it just gives me something else to think about - practice and just keep looking forward rather than looking two weeks ahead.

MacRae was actually only able to play in the Women's PGA Professional Championship because one of her surgeries was delayed and she'd missed about six weeks of practice after recovering from her initial operation.

Said MacRae, discussing her initial reaction to the news of her diagnosis.

"It was the end of January, I had the smear and then five or six weeks later got the results that said there were some abnormalities," she said.

"I had that before, but when I went and they did the biopsy, it was fine, which happens most of the time, so I wasn't too worried about it.

"I didn't tell my mum or sister or anyone. I just went to the hospital to do it and thought I would tell them afterwards. But then obviously it wasn't fine."

MacRae is unsure of how long the operation will keep her away from the game for.

"My normal day is going to the gym and lifting heavy stuff and playing golf, so if they say four to six weeks then most of the time physically I feel okay, but you have to give yourself time to recover on the inside," she said.

Last week's win secured MacRae's spot on the Great Britain and Ireland team for the inaugral Women's PGA Cup in Texas in October.

"For me, it's important to have goals that you can aim towards, so I have a tournament I qualified for - a fourball at the end of August - I have one I am meant to be playing at the end of July, but I don't think I'll get to play that," she added.

From everyone at GolfMagic, we wish you the very best of luck Heather.