Golf's new rules for 2019 have been set to help 'modernise the game'. 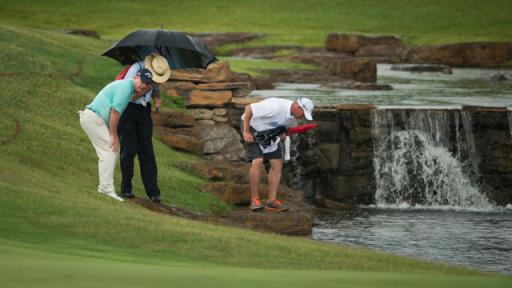 Golf's new rules have been set for January 1, 2019, and one of the big improvements to help modernise the game is being able to GROUND YOUR CLUB in a hazard.

The R&A and USGA recently set up an 'an extensive review that included a request for feedback from the global golf community on the proposed changes.'

GOLF RULES EXPLAINER: WILL THERE REALLY BE NO MORE PROVISIONALL BALLS?!

On the subject of hazards, golf's governing bodies have declared golfers can now touch the ground with their golf club in hazard and can even move impediments in a hazard without any penalty. The rule has been classed as "relaxed rules in a penalty area."

So this sort of rule will help you out the next time you find yourself trying to balance yourself in a stream in order to make sure you don't touch the hazard. You won't be penalised for now doing so.

On top of this, golfers can move loose impediments in bunkers and will not be penalised for generally grounding their club away from their ball.

However, you still CANNOT ground your club when playing a BUNKER shot.

You can still take an unplayable lie from a bunker, should you need to, but with a drop out for two strokes.

One of the biggest changes is the local rule surrounding provisional balls. CLICK HERE TO LEARN MORE.

Golf news
What's the golf rule if I lose my ball in the leaves? Find out...
Golf news
Golf’s new Rules published by R&A and USGA ahead of January 1, 2019