Greg Norman on Tiger Woods: "Maybe he just doesn't like me!" 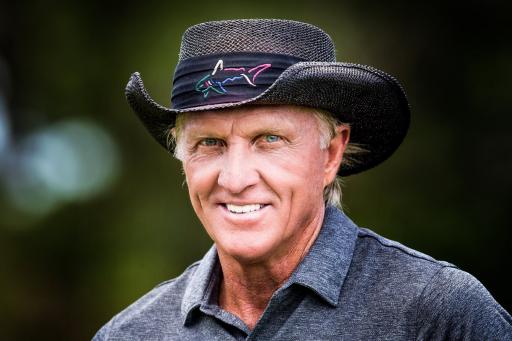 Greg Norman believes Tiger Woods does not like him much given he has not responded to the Australian's handwritten, hand-delivered letter that congratualted his monumental Masters win this April.

Speaking to Men's Health, Norman, 64, considers Woods, 43, has shown a lack of respect by not replying to his note.

"It's a code of conduct in a lot of ways," Norman said in the December Edition of the magazine.

"Very few people know this. When Tiger won The Masters this year, I wrote him a handwritten note and drove down my road, maybe a quarter of a mile, and hand-delivered it to his guard at his gate.

"I said 'Hey this is Greg Norman here, I've got a note for Tiger - can you please hand-deliver it to him?'

"Well, I never heard a word back from the guy."

Norman, who spent 331 weeks as World No.1 in the 80s and 90s, even went as far to compare Woods to the likes of Jack Nicklaus and the late Arnold Palmer, both of whom he claims congratulated him when he won both his two Open Championships in 1986 and 1993.

"When I won my first major championship, Jack Nicklaus was the first person to walk down out of the TV tower and congratulate me," said Norman, winner of 20 PGA Tour titles.

"I don't know - maybe Tiger just dislikes me. I have no idea. I've never had a conversation with him about it."

Norman and Woods' relationship would appear to be flakey at best, especially with the Great White Shark claiming the golf world was becoming far too obsessed with Woods when he won the PGA Tour's season-ending Tour Championship in September last year.

"There is an unbelievable amount of talent bubbling up around the world, and I'd hate to see them get lost again in that Tiger talk."

Woods then went on to win The Masters in April, before struggling much over the summer.

The 15-time major champion bounced back to winning ways in Japan two weeks ago, however, with a commanding three-stroke victory at the ZOZO Championship.

Woods is now up to seventh in the world rankings.

GolfMagic will be speaking to Greg Norman later this week in the United States - stay tuned for our exclusive interview.

Previous
11-year-old golfer cards albatross, eagle, ace & four birdies in round
Next
Here's how much Rory McIlroy and others made at the WGC-HSBC Champions