Rickie Fowler's ball gets stuck up a tree for the second year running at The Players! 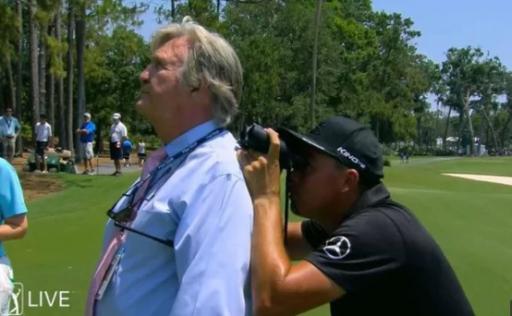 Rickie Fowler needed to use BINOCULARS to find his ball up a tree on the sixth hole during his second round of The Players on Friday.

Fowler launched his tee shot high down the right side of the tree-lined 374-yard par 4 but it never came down.

Fans searched for the ball for a while before one spotted a ball in a palm tree. But in order to take a drop, Fowler needed to identify that it was his ball. Cue the binoculars...

.@RickieFowler's ball got stuck in a tree.He tried just about EVERYTHING to get it back. pic.twitter.com/lF79LSQIRb— PGA TOUR (@PGATOUR) May 11, 2018

Unfortunately for Fowler, only the white portion of the ball was visible from the fairway, and attempts from fans to shake the ball out of the tree proved unsuccessful. Ultimately, Fowler had to retreat to the tee to play his third shot.

Fowler went on to make double bogey and he missed the cut on 1-over alongside Rory McIlroy.

The craziest part of the entire story? Fowler got his ball stuck in a tree a year ago at this very same event.