Hosung Choi - the man with the craziest swing - wins again in Japan!

Hosung Choi up to career-best World No.162 after winning the Heiwa PGM Championship... 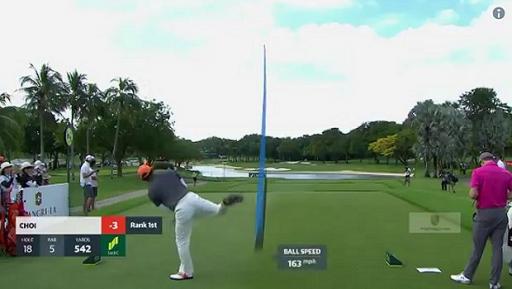 Hosung Choi, the man with the craziest golf swing on Tour, has won his third career title with victory at the Heiwa PGM Championship in Japan.

The win comes exactly 12 months after Choi, 46, put his name in lights in world golf when landing the Casio World Open.

The South Korean carded a final-round 67 to finish on 14-under par, enough for a two-stroke victory over home favourite and World No.45 Shugo Imahira.

Check out video highlights of Choi's victory below, and to check out more of his unique golf swing...

Choi made his PGA Tour debut earlier this year on a sponsor exemption at the AT&T Pebble Beach Pro-Am but he missed the cut.

Since then, he has missed multiple cuts in Japan, along with a couple of withdrawals.

But his game has started to turn a corner with three top-five finishes in his last nine starts, highlighted by victory on Sunday.

Choi won his first tournament at the Enjoy Jakarta Indonesia PGA Championship, co-sanctioned by the OneAsia Tour and Japan Golf Tour, and this made him eligible for Japan Golf Tour membership, which he has mantained ever since.

What many people don't know about Choi is that when he was just 19 years old, he lost part of his thumb in an chainsaw accident.

According to the PGA Tour, "his thumb was reattached through a skin graft that included a piece of skin from his stomach."