How and when Tiger Woods will beat Jack Nicklaus' major record...

It's golf's greatest question, but Tiger Woods WILL go on to beat Jack Nicklaus major record, writes Will Trinkwon... 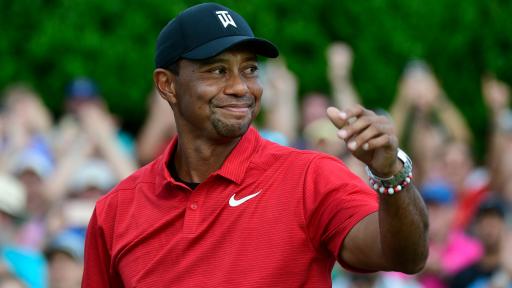 When Tiger Woods sealed his historic victory at Augusta earlier this year, he not only secured his fifth green jacket, but simultaneously pulled to within just three majors of tying Jack Nicklaus’s all-time-major-wins record of 18.

The question of whether Woods would be able to match or even better the Golden Bear’s mark, so long a preoccupation of journalists (but in recent years dead in the water), instantly fired up again.

Nicklaus himself was pulled in from a fishing trip to give comment on Woods’s chances (which he deemed fair, if he stays clear of injury), and sports writers and pundits from all over the world weighed in on speculating upon the Big Cat’s future. The prognosis was mixed, testifying to the very real difficulty of the task which Woods faces.

But as a long-time Tiger fan and an unashamed believer in the great man’s prowess, I remain convinced that Woods will go on to beat the Golden Bear’s target. For me the question is not if, but how.

Here’s how it will happen over the next six years before Tiger turns 50...

I don't see Woods contending for the Claret Jug at Royal Portrush in July, but I do expect him to get straight back on the major ladder at one of his favourite courses in the world, Augusta National.

No matter what sort of form Woods is in when he plays The Masters, he always finds a way to either win or at least get his name high up on the leaderboard come Sunday.

Providing his neck and back niggles don't worsen over the next nine months, I fully expect Woods to be in the mix once again at the 2020 Masters and I think he will sprint away from them for a sixth career green jacket, which would also match the feat of Nicklaus.

For me, Woods will once again slip on the famous green jacket in consecutive years, just as he did in 2002, and he will move to within just two major wins of Nicklaus.

No More US PGA Wins

Whilst it would be foolish to count Tiger out for any of the majors, the odds are that any future wins are unlikely to come in the US PGA.

The US PGA Championship tends to favour ‘blunt tools’, longer hitters who give little regard to accuracy and instead focus on bombing it as far as down the course as they can, in the knowledge that they have the power to extricate themselves from the rough if required.

It’s setups are typically less brutal than the US Open and less quirky than the British counterpart, which allows for this kind of reckless, power-orientated play.

Although Woods is hardly a short hitter, these kinds of set ups aren’t favourable to what, over the next five to 10 years, is likely to be an increasingly senile Tiger.

Players such as Brooks Koepka, Dustin Johnson, Gary Woodland and Rory McIlroy can already outgun him by almost 20 or 30 yards, and this gap is only going to get bigger as Tiger’s body continues to succumb to the effects of age and sporting wear and tear.

The US PGA also offers few opportunities for Woods to trade on any of his hard-won local knowledge. Venues tend to alternate very dramatically each year, with the championship often being given to first time hosts over more tried and tested ones.

I want Tiger to reach Nicklaus’ record as much as anybody, but for these reasons, I don’t think he’s going to do it by winning any more PGAs.

No More Opens Either

As I've already mentioned, this year’s Open is very much a write-off for Woods, who has not even seen Royal Portrush yet.

For me, Northern Ireland’s own Rory McIlroy will be a tough man to beat at Portrush, where he holds the course record of 61.

I can’t see Woods winning at Royal St. George’s either, the site of the 2020 Open, as I think he will find himself in far too much trouble off the tee.

The year after that sees the Claret Jug return to St. Andrews where Woods has won twice, and while you would like to think he has a cracking shot at the title that week, the last time he played in a Open at St Andrews in 2015 he missed the cut - albeit on his way out of form.

Whilst I’m happy to grant Tiger a few more top-10s in this most historic of championships, I’m not sure I see him getting over the line in any of them.

It may be a bold call with the Open returning to Royal Liverpool in 2022 and Muirfield in 2023, both venues which Woods has performed well at, but my gut feeling is that Woods’ major tally won’t be helped by another Open.

Other majors offer him a better chance of matching Nicklaus’s record.

I'm confident Woods reboots his quest to beat Nicklaus' major tally at the 2021 US Open at Torrey Pines.

Along with Bay Hill and Firestone, Torrey Pines is a course Tiger has dominated, winning a record eight times around the track, including the US Open on one leg in 2008. That was the year he holed THAT putt, sliding in a clutch 15-footer at the last to catch Rocco Mediate and force him to an 18-hole play-off, which he went on to win and land career major #14.

Torrey Pines' South Course is a layout he knows like the back of his hand. Provided he’s in good physical form, which, given the armada of physicians and personal trainers Woods has access to, seems likely, the 2021 US Open in my eyes has only one winner.

Mark my words, 2021 will be the year in which Woods grabs #17 and it's going to happen at Torrey Pines on Sunday June 20.

Woods ties Nicklaus’ major record on the best possible stage at Augusta National in 2023 at the age of 47 - a year older than when Nicklaus reached #18 at the 1986 Masters.

The Masters has a rich history of wily older champions, and local knowledge is a big factor, both details which play into Tiger’s hands.

Again, providing that Tiger stays healthy, I fancy him to keep hacking up or at worst contending on a Sunday for The Masters until he's 50.

Mark it in the diary now: Sunday April 10, 2022, is the date Woods enters the record books and ties Nicklaus' major record. It will also give him the outright lead in the most Masters titles with seven.

After winning his 18th major, Woods will endure a barren spell of tournaments, flunking out off of leaderboards and generally struggling with his game.

Expect old injuries to flare up, his back to stiffen, and his legs to once again go.

As he nears his 50th birthday at the end of the year, Tiger is once again in visible decline. But the will is still there. A core of inner resolve gives him hope. Woods vows to have one last tilt at the major he’s loved so well in 2025.

A first-round 70 leaves him in familiar territory, and when he follows this up with a pair of 69s, the gallery dares to dream.

Midway through the back nine on Sunday, Woods finally hits the front as a nervy-looking McIlroy dumps a 4-iron into the pond on 15 to toss away a slender one-stroke lead.

In an echo of Nicklaus in 1986, and three years older at 49, Woods promptly eagles the very same hole before throwing in a birdie at 16 for good measure. The patrons surge, even though they're not allowed  to run. They can't help it. But not even the marshals care. It's happening.

A miss short right of the green at 18 causes some concern, but Woods can afford to three from there to win. A superb chip to two feet for par brings the house down on 18 and TIGER HAS DONE IT!

The Big Cat wins the Masters for a record eighth occasion giving him the unthinkable major record of 19 wins that nobody deemed possible, especially during his decline on and off the course 10 years previous.

Inside the clubhouse, an aged Nicklaus graciously accepts defeat and, in an unprecedented change from tradition, places the ceremonial green jacket upon Woods’ tired shoulders.

It fits like a glove, and its now undisputed: Tiger Woods, officially the greatest player of all time.