How golf drawings helped free an innocent man from prison 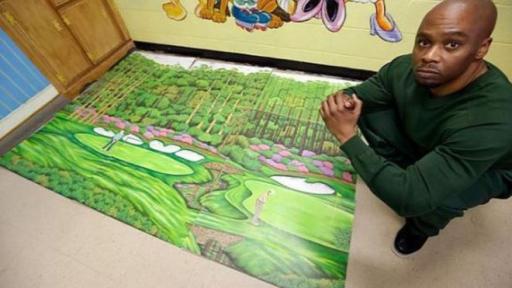 An American man named Valentino Dixon was freed from prison after serving 27 years for a crime he did not commit, all thanks to a journalist at Golf Digest!

Dixon, 48, was freed after his extraordinary talent for drawing golf courses brought his case to the attention of a journalist at Golf Digest, whose research found crucial flaws in the case against him.

He always maintained he was not responsible for the 1991 shooting of a 17-year-old in Buffalo, New York, despite being sentenced to a minimum of 38 years in prison for murder.

“It's the greatest feeling in the world," Dixon said as he walked free, according to the Buffalo News. “We've been waiting 27 years for this.”

Dixon's artwork had impressed the editors of Golf Digest so much in 2012 that the brand ran a feature in its "Golf saved my life" slot, along with a selection of his drawings.

“In the accumulation of every detail,” he said in an interview a year later. “I'm left without any doubt that he is innocent.''

Within two days of the killing of Torriano Jackson in a car park, another man had told local media that he was responsible.

“I don't want my friend [Mr Dixon] to take the rap for something that I did,” Lamarr Scott told a WGRZ-TV reporter.

Mr Dixon’s own defence failed to call witnesses that would have supported his innocence. In an unusual step, the lead investigator in the case did not present evidence at the trial.

The spotlight provided by Golf Digest led to more attention and the case was picked up by the Prisons and Justice Initiative at Georgetown University. Its students revealed a further problem with the prosecution case: Government lawyers failed to tell the defence that Mr Dixon's clothes revealed no traces of the residues expected on someone who has used a firearm.

On Wednesday, the case returned to the Erie County Courthouse for Scott’s confession to be finally heard.

“I grabbed the gun,” he said, according to the Buffalo News. “I pulled the trigger and all the bullets came out. Unfortunately, Torriano ended up dying.”

An hour later, Mr Dixon was told he would be freed.

“Lesser men would’ve broken,” wrote Golf Digest. “With his mind and body in tact, Dixon hopefully has some good years ahead. Maybe he’ll even take up golf."