Poulter and Koepka could be in for an interesting week by the looks of things... 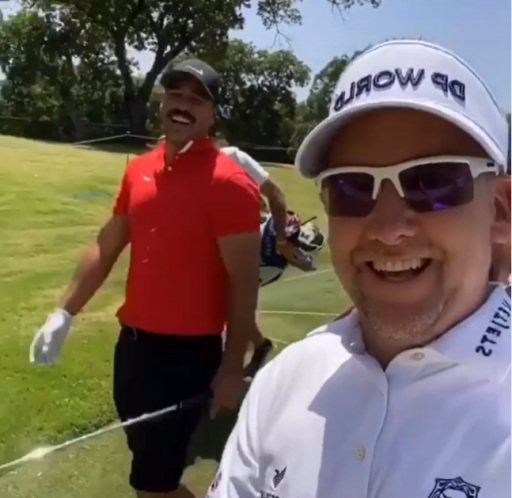 If Ian Poulter's pre-round video is anything to go by then you will probably want to swerve backing the Englishman or former World No.1 Brooks Koepka at this week's Charles Schwab Challenge, which marks the return of PGA Tour action during the coronavirus lockdown.

Poulter posted a hilarious video during his practice round with Koepka earlier this afternoon, where he revealed both he and the American were "splashing for fun" on the back nine at Colonial...

Had a great laugh with @bkoepka during my practice round on the back 9 at Colonial yesterday, splashing for fun! Bring on the @charles_schwab_challenge tomorrow ⁣ ⁣ #golf #pgatour #charlesschwabchallenge

"Oh dear, I'm not telling you. I've floated one in the water down here, I've then pulled the nuts of one and ended up down there.

"Brooks has gone 'do you want a shag bag?'

"So what's Brooksy done? He's followed me in the water down there, he's then wafted one up in the air and he's then gone 'well it only took me two' as it bounces back in the water [laughs]. Great call, love it."

Koepka, now the World No.3, starts this week at odds of 25/1 having endured a wretched run of form before the lockdown while he recovered from injury.

Rory McIlroy starts as the pre-tournament favourite at 9/1, with a host of big names tucked in behind in the betting including Jon Rahm at 12/1 and Justin Thomas at 16/1.

Kevin Na won last year's tournament with a four-stroke victory over Tony Finau on 13-under par.

NEXT PAGE: JUSTIN THOMAS CLAIMS HE DOES NOT WANT TO BE MIC'D UP AT CHARLES SCHWAB