Jack Nicklaus has an "oops" moment on text with Justin Thomas 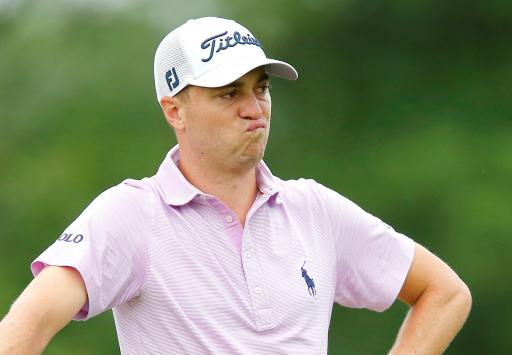 Jack Nicklaus revealed he had "oops" moment with Justin Thomas when sending him a premature congratulatory text at the Workday Charity Open on Sunday.

Nicklaus, who hosts this week's Memorial Tournament at Muirfield Village where last week's tournament also took place, admitted to seeing Thomas drain his 50-foot birdie putt on the first extra hole just before the wi-fi cut out while boarding an aircraft.

As things turned out, Morikawa went on to bury his 25-foot birdie putt to continue the playoff, and then duly went on to beat Thomas for his second career PGA Tour title with a par at the third extra hole.

Nicklaus admitted to feeling a little red-faced upon checking the result when he landed on the tarmac.

"I had a little bit of an 'oops' last week myself," said Memorial Tournament host and 18-time record major holder Nicklaus.

"We were getting up here, we scheduled our flight to get up here because I wanted to see -- congratulate the winner in the locker room at 6:00, and of course then they moved up the tee times, and that didn't work out.

"So we were getting on an airplane at 2:00 which is when we were coming up here, and just as we were getting ready to take off, the first hole of the playoff, Justin Thomas holes that big long putt. Well, I saw the putt. We didn't see Morikawa's putt.

"Barbara and I both texted Justin and said to him, wow, what a fantastic putt, unbelievable fantastic super putt, can't believe that you made that putt. Now you've got the chance to win two in a row.

"Then we got up in the air, and we picked up wi-fi after 10,000 feet, and we found out Morikawa won the tournament, and so I had to send him another text and say, Oops, a little premature.

"He [Thomas] was good about it. He texted back and he said, 'all's good, it's okay'. He was good about it, and Morikawa, what a pretty golf swing he's got. You know, obviously to hole that putt behind Thomas was something pretty special, but I didn't see a lot of it."

Nicklaus will certainly see a lot of the golf this week as tournament host at Muirfield Village.

Tiger Woods makes his return to the PGA Tour and will bid to win this event for a record sixth time, while the hottest player in golf and tournament favourite Bryson DeChambeau will look to win back-to-back events having landed the Rocket Mortgage Classic two weeks ago.