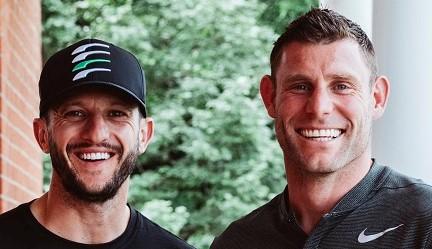 The sports performance application helps golfers analyse their game and understand their strengths and weaknesses. It generates and uses a variety of critical stats through which a player is able to track his/her performance on the golf course via a map-based interface and unique metrics, that are shareable between player and coach via the app itself.

UpGame’s popularity is growing rapidly amongst elite and casual golfers with a desire to improve. The app has seen 15-fold growth in its monthly revenues since January this year, retaining more than 85% of its users as it expands across geographies.

In the last couple of months, players utilising the app scored three wins in the space of two weeks on the two biggest Tours in the world. Australian Lucas Herbert and compatriot Cam Davis won the Dubai Duty Free Irish Open and the Rocket Mortgage Classic on the European and the PGA Tours’ respectively. A week later, Min Woo Lee triumphed at the Scottish Open.

James Milner, Co-Founder of White Rose Sports Management, said: “The use of data and analytics have become hugely important in nearly all sports. The staff and players at White Rose all appreciate the importance analytics provide in improving and contributing to the performance of individuals and teams.”

“From the moment we discussed the ethos of White Rose Sports Management, we wanted performance to be at the heart of everything we did. And this aspect was very apparent in the UpGame team in our initial interactions. We love their vision of bringing performance improvement to athlete’s around the world, the team’s intense focus, quick execution and their deep insights on their users. We are delighted to be a part of their journey”, commented Matthew Buck, Director of White Rose Sports Management.

Sameer Sawhney, founder and CEO of UpGame, said: “Last year proved to be critical for UpGame. Our entire team was able to double down our focus on the product and in spite of the challenges of travel, we have become the product of choice in every continent. For example, with college season kicking in the US, we cannot sign up teams fast enough.

“We are excited to replicate our success in golf to other sports and be at the center of learning and performance improvement in the growing sports technology space.”

White Rose Sports Management was established in 2015 by James Milner, himself an avid golfer with a 7.4 handicap. The company’s approach is rooted in performance, attitude and application, with a belief that all talented athletes can achieve and maintain success with the right mindset and performance-focused management team.

The agency has a dedicated team of experts with extensive experience, knowledge and exposure to what it takes to maintain a successful career in sport, and specifically golf. This includes Dr. Stephen McGregor who has previously worked with two former world number ones in Rory McIlroy and Lee Westwood, plus a host of professional sports teams, including Manchester City, Leeds United, Aston Villa and the New York Knicks.

In addition to Milner and McGregor’s vast experience in elite sport, in 2020 Adam Lallana became a Director at White Rose. A keen golfer, Lallana - who now plays for Brighton & Hove Albion - made his professional debut at Southampton as an 18-year-old. He joined Liverpool in 2014 and went on to win the Premier League, UEFA Champions League, UEFA Super Cup and FIFA Club World Cup during a successful six-year stay on Merseyside.