Jon Rahm thought he had forced a playoff with Marc Leishman

Rahm shocked to realise he had not done enough to force extra holes with Leishman. 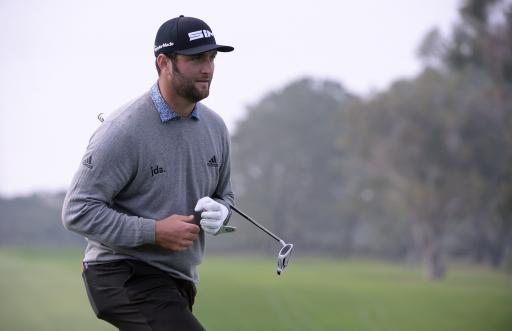 Jon Rahm incredibly did not realise that he needed to make his 50-foot eagle putt at the 18th in order to force a playoff with eventual winner Marc Leishman at the Farmers Insurance Open on Sunday.

Rahm, who won his maiden PGA Tour event at Torrey Pines in 2017, found the back of the final green following a superb drive and fairway wood, leaving himself a very similar putt to the eagle he holed during his last victory there three years ago.

Playing in the final threeball of the day with Rory McIlroy and Ryan Palmer, and two groups ahead of Leishman, Rahm left his putt in the jaws of the cup but still thought his tap-in birdie for a 14-under par total was good enough for a playoff with the Australian.

As he walked off the back of the green and anticipated a trip back up the 18th, Rahm, to his disbelief found out from his caddie Adam Hayes that he had come up one stroke shy.

Despite pulling up a foot short of the cup, Rahm explained he would not have hit the putt any differently even he had known the eagle putt had to go down to force extra holes.

"I wouldn't have changed anything," said Rahm.

"I hit a great drive and a great second shot. The putt, that's a tough putt. You can't just ram it by 10 feet by, it's just not going to go in.

"So I did hit it with trying to make it with perfect speed, thinking a two-putt would get into a playoff."