Jordan Spieth: "I blacked out" during Travelers bunker celebration 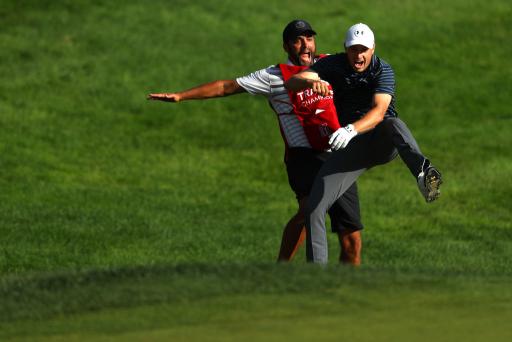 Jordan Spieth has revealed how he "blacked out" during his memorable player-caddie celebration when holing his bunker shot in the playoff to win the Travelers Championship 12 months ago.

Spieth defeated compatriot Daniel Berger in the playoff last year after slamming home his greenside bunker shot, before racing out the bunker to chest bump his caddie Michael Greller.

The three-time major champion threw down his wedge. Greller threw down the rake. A chest bump ensued. A GIF quickly went viral. Even kids re-enacted the moment.

“Just that celebration in general, I blacked out,” Spieth recalled to the media ahead of this week's Travelers Championship.

“It drops and you just react. For me, I’ve had a few instances where I’ve been able to celebrate or react on a 72nd, 73rd hole, 74th hole, whatever it may be, and it just shows how much it means to us.”

The moment was so popular among tournament officials that they sent the rake to Greller as a keepsake.

Spieth enters as one of the tournament favourites this week, despite the fact he has missed his last two cuts.

US Open champion Brooks Koepka is back on the scene, as too Justin Thomas, Jason Day and Rory McIlroy, another player looking to get back in the saddle after some disappointing results of late.