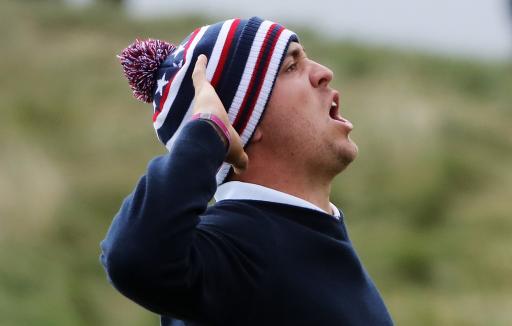 Ready to play alongside his childhood hero Tiger Woods at this week's Hero World Challenge, Justin Thomas decided to welcome the 14-time major champion back to competitive action with a joke.

Woods, now seemingly fully recovered from his back surgery, returns to golf for the first time on Thursday since withdrawing from the first round of the Dubai Desert Classic in February.

But the beauty of social media is that not everyone can take a joke, as the current US PGA champion discovered this week.

"If he [Tiger] hadn’t done everything he’s done, we wouldn’t have the sponsors we have," said Thomas.

"If it wasn’t for him we wouldn’t be playing for the amount of money that we’re playing for.

"Obviously there’s a lot of other players, but there’s nobody that moves the needle like him, even now. If he had 15 wins and two majors, then yeah, people wouldn’t care as much, but he has 79 and 14 majors."

Thomas then added of the high-profile first round pairing: "I'm probably just excited to watch it as you are. I just get a front seat to it on Thursday, but I'm also looking forward to trying to kick his ass to be perfectly honest."

Peter Millar have an AMAZING selection of golf shorts!
The BEST PUMA golf polo shirts as seen on the PGA Tour!

Truly cracks me up some stuff people say on social media.. this one had me going pretty good #nosenseofhumor #thousandyearsthough???? pic.twitter.com/VLVXgYLKWG— Justin Thomas (@JustinThomas34) November 29, 2017

One Instagram user saw that final quote and took it upon himself to let the reigning PGA Tour Player of the Year know that he would never measure up to Woods' accomplishments, even if he played for "another thousand years."

Thomas screenshotted the burn for his 209k Twitter followers to have a good laugh over at the poor chap's expense.