A late rally from the USA has drawn them closer to the Internationals in the 2019 Presidents Cup. 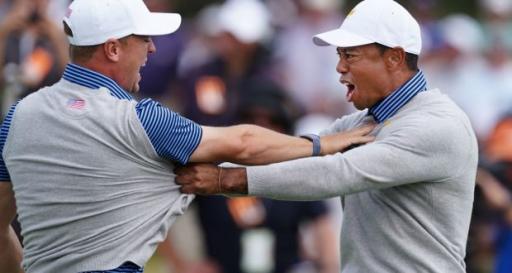 The gap after day two remains the same as it was after day one of the 2019 Presidents Cup, but momentum has shifted in favour of the Americans after a late rally saw Tiger Woods' team salvage two and a half points when it looks as though the Internationals were going to extend their lead.

Both Patrick Cantlay and Justin Thomas made dramatic birdie putts on the 18th hole to win their matches, while Rickie Fowler, who wasn't a part of the action in day one, sank a clutch par putt to give his side another half point.

The Internationals now lead 6.5 - 3.5 heading into the 36-hole Saturday double-header and Internationals captain Els believes that Friday's minor-late setback can be a learning curve for his players.

“This is the beast that sometimes bites you. You want to put a spear in it, but sometimes it fights back, and that is the nature of this Cup,” Els said.

“The big picture is what it is. I am just looking at my guys. I just want my guys to play as good as they can and get the best results as they can. That is all I kept thinking and can hope for. This was probably good what happened the last couple of holes so that the guys can understand what can happen in the Cup. Saying that, we are in the lead.”

In match one on Friday, Louis Oosthuizen and Adam Scott extended the Internationals' lead with a 3&2 victory over Dustin Johnson and Matt Kuchar. The American duo were two up after seven holes, but the experienced South African and Australian clawed their way back in style.

Cantlay sunk a 14-footer for birdie on the 18th to level the scores for the day as he and Xander Schauffele beat Adam Hadwin and Joaquin Niemann.

RELATED: Joaquin Niemann motions Tiger Woods to hurry up in day one match-up

Abraham Ancer and Marc Leishman won another crucial point for the Internationals, seeing off Patrick Reed and Webb Simpson 3&2. There of course was some added controversy with Reed, as a fan shouted 'MISS!' when the American was putting. The putt went in and Reed played the role of the villain perfectly with this fantastic response, watch below.

Patrick Reed having some fun with the crowd. #QuickHits pic.twitter.com/RFEz6kgaUQ

Justin Thomas and Tiger Woods beat Byeong Hun An and Hideki Matsuyama, thanks to JT sinking the same birdie putt that Cantlay had faced earlier in the day. The putt from Thomas sparked an emotional reaction from the pair, showing just how important that point was to the USA's momentum. Check it out below.

The final match of the day saw Rickie Fowler and Gary Woodland take on Sungjae Im and Cameron Smith, which ended in a tie thanks to Fowler's clutch par save at the last.

“Momentum is huge,” Woodland said. “That was a huge half-point. Any time you can scrape out something; we did it. Now we have to regroup. We have 36 ahead of us tomorrow and hopefully go out and flip this a little bit.”