Man admits to attempting murder on May 2. 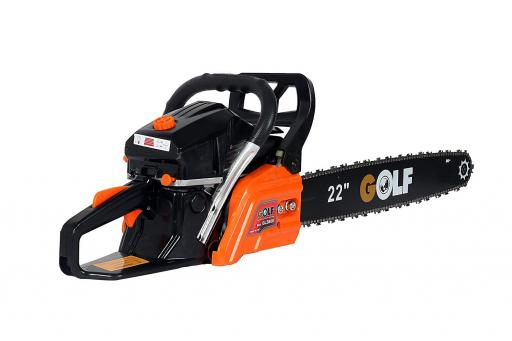 A bare-chested man smiled as he attacked a complete stranger with a chainsaw at a golf club.

The High Court in Glasgow heard Brown scraped the chainsaw down the right side of his victim's head and the top of his right shoulder.

Brown admitted attempting to murder Mr Innes on 2 May.

The father-of-three was only wearing a pair of jeans when he approached Mr Innes and his friends Ian Martin, 61, and Matthew Waterson, 71, with the chainsaw in his hands.

At the time of the attack, which happened about 14:00, the men were getting their golf clubs out of their cars.

Mr Martin, who backed away, said the accused was smiling and his eyes were bulging out of his head.

He was wearing no top and no shoes. Seconds later Brown pulled the chainsaw cord and it started immediately.

Mr Innes was wedged between cars in the car park and could not escape.

Brown raised the chainsaw and brought it down towards his victim, who put up his arm to protect himself and was struck on the upper arm.

Prosecutor Owen Mullan said: "The accused against struck Mr Innes with the chainsaw, scraping it down the right side of his head and the top of his right shoulder.

"As the accused did this Mr Innes turned to face him, put his head down and barged into him, forcing him backwards."

The court heard the accused then ran off after dropping the chainsaw.

Doctors who treated Mr Innes at Ninewells Hospital in Dundee said he was lucky the wounds were not deeper.

Almost two hours later, at 15:50 the accused approached Andrew Hay, who was on his mobile phone, at the Kingsway and said: "I'm asking you for help."

He then punched Mr Hay and pushed him to the ground before running off.

Minutes later Brown, who was wearing no top and no shoes, walked out into the carriageway.

Driver Callum MacKay managed to stop his car a foot from Brown who started shouting at him and laughing.

Brown was found collapsed outside the back door of grandmother Michelle Hunter, who thought he may be having a breakdown.

"I attacked someone with a chainsaw on the golf course."

When police arrived Brown said: "I didn't mean to do it" and asked: "Have I badly hurt him?"

Brown then said: "I want to stay on my knees and pray for the guy I hurt. If I've hurt somebody I won't live with myself."

A cannabis farm was later found in the accused's home in Graham Court, Dalclaverhouse, Dundee.

In court, Brown, who is a prisoner at Perth, pleaded guilty to the assaults, attempted murder, being concerned in the supply of cannabis and possession of the other drugs.

Mr Renucci told the court psychiatric reports were prepared and the conclusion was that most of his behaviour was attributed to his drug misuse.

Judge Lord Matthews called for a background report on Brown and will sentence him next month.