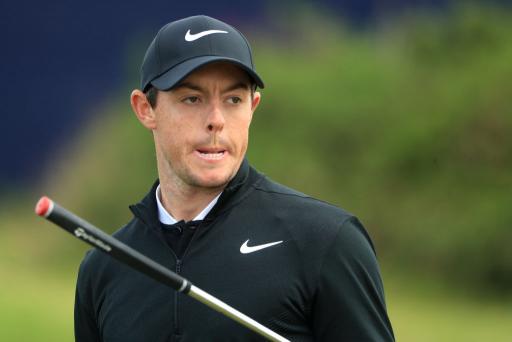 Rory McIlroy vented his anger with an F-Bomb en route to shooting an opening 2-over 74 at the Scottish Open.

Starting off the 10th, McIlroy got off to the worst possible start with bogeys at the 11th and 12th before compounding things with a double-bogey six at the 13th.

Frustration then reached boiling point for McIlroy when he swore off the tee after supposedly being put off by a camera phone...

Turn your phones to silent ffs! #scottishopen @rorymcilroy A post shared by Golfcentral Daily (@golfcentraldaily) on Jul 13, 2017 at 4:34am PDT

The Northern Irishman looked to balance the books on his back nine - the front nine - with birdies at the third, fifth and seventh but finished on a bad note with a bogey at the ninth to sign for a round of 2-over 74.

Following a tie for 35th at The Players Championship in May, McIlroy went on to miss the cut at the US Open with rounds of 78 and 71.

The world number four finished in style with a 64 at the Travelers Championship to salvage a tie for 17th, before going on to miss another cut at his home Irish Open with rounds of 72 and 73.

Should McIlroy go on to miss the cut this week, which looks a distinct possibility given he sits in and around 100th position in Scotland, it would mark the first time he has missed three cuts in his last four starts since the summer of 2012.

Tournament favourite Rickie Fowler got off to a flyer with a round of 5-under 67 alongside a resurgent Ian Poulter, Callum Shinkwin and Andrew Dodt.