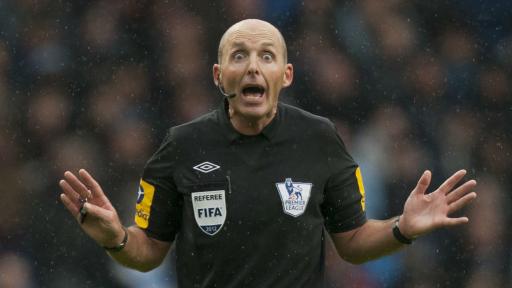 Dean, 51, was carrying the bag of Hillier during the Estrella Damm Mediterranean Ladies Open in Spain.

Hillier holed out on the 17th hole with a 5-iron during a round of 66.

She went on to finish seventh in the tournament.

WATCH the magic moment as Hillier holes for an ace, much to the delight of Dean...

It was not the first time Dean had been celebrating something in an unusual location.

Earlier this year he was spotted giving it large in the crowd when his beloved Tranmere Rovers reached the League Two play-off final.

It would appear Dean was a good omen for Hillier, who this week leads the Hero Indian Open heading into the weekend.

Dean has been labelled by many as the Premier League's most controversial refereee.

He had a bust-up with Tottenham boss Mauricio Pochettino following their match against Burnley last season, and Arsenal launched a petition to stop him reffing their matches.

In April, Dean made history by becoming the first Premier League ref to hand out 100 red cards when giving Ashley Young his marching orders in Manchester United's away trip to Wolverhampton Wanderers.

Dean stepped down from the FIFA international list at the end of 2013 at the mandatory retirement age of 45.

Arguably his highest refereeing honour came in May 2008 when he took charge of the FA Cup final between Portsmouth and Cardiff City.