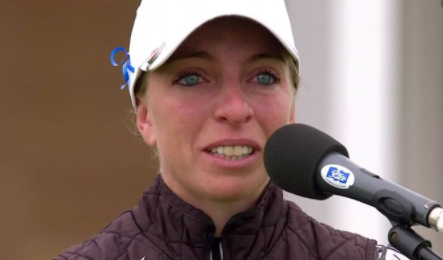 Women's Open champion Sophia Popov has been denied an invite into this week's CME Group World Tour Championship, with Natalie Gulbis and Sarah Kemp receiving invites to the season finale instead.

Popov, 28, pulled off one of the biggest shocks in golf major history when she clinched her maiden major title with a two-stroke victory at the AIG Women's Open at Troon in August.

The two sponsor exemptions for the LPGA's grand finale go to Sarah Kemp and Natalie Gulbis. Left out is Sophia Popov, who didn't get credit for her Women's British Open because she wasn't a member at the time.

As a result, Popov's points total for her victory at Troon did not count on the LPGA Tour standings. If they had done then Popov would sit 16th in this year's standings, and comfortably inside the qualification spots for this week's CME Group World Tour Championship in Naples, Florida.

"It’s a fairness thing as far as playing ability," Popov told GolfWeek. "It’s not like I haven’t earned it. I have earned it points-wise, technically."

Popov has been overlooked for an invite into this week's event, with American Natalie Gulbis and Australian Sarah Kemp receiving sponsors invites instead as CME ambassadors.

According to a report in The Telegraph, the chief executive of CME Group Terry Duffy has given Gulbis an invite into the tournament because he has "known her since 2005."

"Such a joke," tweeted one irate golf fan on Twitter. "It would have been interesting if she had an American flag next to her name instead of German, or won the US Open instead of British if the decision would have been different."

The winner of the CME Group World our Championship receives $1.5 million.

What do you make of Sophia Popov being refused an invite into this week's season finale on the LPGA Tour? Share your thoughts and comments on our social media channels, or come and join us over on the GolfMagic YouTube channel.