NOT AGAIN! Tyrrell Hatton hits golf fan in the head at Dunhill Links

Another week on Tour, another golf spectator left bleeding, this time at Kingsbarns. 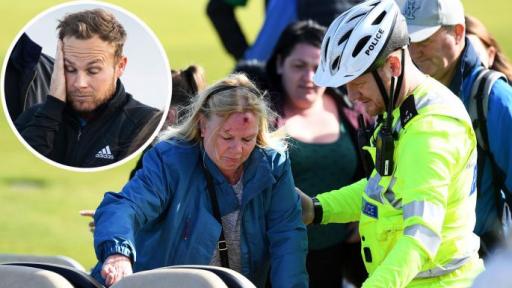 Just a week removed from a lady golf fan losing her eyesight after being struck by Brooks Koepka's wild drive at the Ryder Cup in Paris, another lady spectator has been hit in the forehead by an erratic  golf ball - this time from Tyrrell Hatton.

The female spectator was pictured bleeding from a head wound after being hit by a tee shot from the victorious 2018 European Ryder Cup star on the 15th hole at Kingsbarns, one of the three courses staging the Dunhill Links.

She was treated on the course by paramedics before being taken by buggy to the medical center on site.

KOEPKA: HITTING LADY GOLF FAN WAS "ONE OF WORST DAYS OF MY LIFE"

Hatton spoke to her when she returned to her feet after receiving treatment, and she was later seen walking to a golf cart and smiling as she was taken to an on-site medical centre.

The Englishman is bidding to win this tournament for a third consecutive year, and he is in contention to do just that going into the weekend.