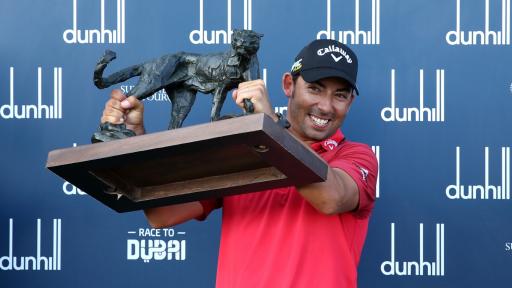 Pablo Larrazabal overcame errant shots, sore blisters and a mid-round strop to see out a narrow one-stroke victory at the Alfred Dunhill Championship at Leopard Creek.

Larrazabal, 36, began the final round with a commanding three-stroke lead but quickly saw it evaporate when carding five bogeys and a double bogey on the opening nine, with a birdie sandwiched in at the sixth.

The Spaniard was seen hobbling for much of his round, and things really started to implode at the par-4 ninth as Larrazabal duck hooked his drive way left. He then sat down in front of the tee box, threw his driver on the ground in disgust and then took off his shoes before walking in his socks through the rough up to his ball.

I don't know, Jim. There's obviously something wrong with him. He's taken off his shoes and one of his socks and... actually, I think he's crying pic.twitter.com/4XDJdo2vWm

Larrazabal appeared to re-group at the turn with a birdie at the 11th, before handing it back quickly at the par-5 13th to fall three strokes back.

But taking inspiration from what Tiger Woods once did when winning the 2008 US Open with a broken leg, Larrazabal rallied to the line with one of the most impressive finishes to a European Tour event we have seen in 2019.

Larrazabal drained a 10-footer for birdie at the par-5 15th and then tucked away a beautiful putt from 20 feet at the tricky par-3 16th over water to move into a tie for the lead.

A par followed at 17, and with Joel Sjoholm making par on the 18th hole in the group in front, it left Larrazabal and playing partner Will Besseling with the door open for a birdie and the win.

Larrazabal found rough off the 18th tee and was forced into a lay-up short of the water guarding the green, while Besseling found the intermediate rough and went for it in two only to find the rocks at the back of the green.

The Spaniard then played one of the shots of the week into 18 with a stunning wedge from inside of 100 yards to three feet.

Besseling went on to make bogey as Larrazabal tapped his ball home for the win.

“I woke up this morning and I didn’t think I was going to play,” said Larrazábal.

“I couldn’t put my shoe on, I couldn’t walk to the buggy. I really struggled on the back nine, I have a big blister on my right toe and I said to myself ‘If Tiger can win a US Open with a broken leg…’ and I just fought hard.”

Larrazabal hit two of the most incredible shots of the week, both for birdie on the par-3 12th on Friday and Saturday. Check these efforts out below...

Larrazabal moves to the top of the Race to Dubai standings as this was the first tournament of the new 2020 European Tour season.

It marks Larrazabal's fifth career victory on the European Tour, and his first since 2015.