Uihelin: "First low round of the year, I feel like, and I have to go piss in a cup." 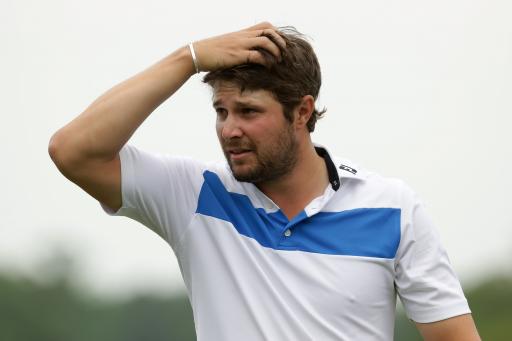 Peter Uihlein raced out the blocks on day three of the Wells Fargo Championship with a 9-under 62 at Quail Hollow, and was then immediately asked to take a drug test.

“Yeah, it's totally ironic. First low round of the year, I feel like, and I have to go piss in a cup,” said Uihlein, whose lowest round of his Tour career moves him up to 7-under and in contention for the title on Sunday.

The 2010 US Amateur's round of 62 is something of a course record since it's the lowest number anyone has shot in competition since renovations were made to the course.

Rory McIlroy actually holds the course record of 11-under 61 en route to victory at the 2015 Wells Fargo, when the course was still a par-72 layout. He also fired a 10-under 62 on Sunday when he first won back 2010.

Asked how the rounds matched up, McIlroy - who bounced back from a dismal second-round 76 with a 66 to move up to 3-under but still outside the top 15 - was quick with his response.

“My 61 was way better,” he joked, quickly adding that “it's a different golf course. I mean, 9 under around this place is really good.”

“It was sort of sunny and there wasn't much wind, similar conditions to today,” McIlroy later said, referencing his 61. “I don't know. I mean, I guess you could go back and see what my strokes gained against the field was compared to his and that's a good way to compare.”

For reference, McIlroy picked up 10.2 strokes on the field during his 61. Uihlein, as of this writing, was only about 8.1 strokes ahead.

Uihlein played a six-hole stretch in 7-under par, with birdies at the fifth through to the ninth followed by an eagle at the 10th.

"With the conditions being overcast and no wind, it definitely feels it played a little bit easier than it did the first two days," he said.

"The first two days felt like a US Open."

Further down the board, Tiger Woods struck a third-round 68 to progress to 1-under for the tournament but well out of contention.