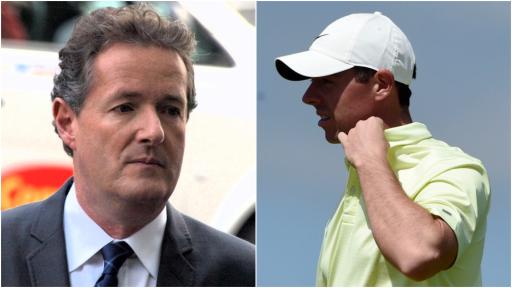 Former Good Morning Britain host Piers Morgan believes "nobody cares about a Covid-ravaged Olympics" this summer - and his comment has been hit by immediate criticism by the likes of BBC presenters Gary Lineker and Gabby Logan.

The outspoken Morgan made his feelings be known on Twitter just several days before the start of the Men's Golf Tournament, which has already seen major champions Jon Rahm and Bryson DeChambeau withdraw due to a positive Covid-19 test.

For World No.1 Rahm, it marks his second positive Covid test in the space of six weeks.

Only Morgan does not feel any of the sports should be taking place in Tokyo this summer.

Nobody cares about these covid-ravaged Olympics. I feel incredibly sorry for all the athletes still trying to live their Olympic dream, but that is the harsh reality. And the great champions like @adam_peaty know it.
It should have been either further postponed or cancelled.

Morgan tweeted: "Nobody cares about these covid-ravaged Olympics. I feel incredibly sorry for all the athletes still trying to live their Olympic dream, but that is the harsh reality. And the great champions like Adam Peaty know it. It should have been either further postponed or cancelled."

Lead BBC Sport presenter Logan hit back at Morgan's comments on Twitter, as the debate rages on:

I think you are wrong Piers. I think some people do care. You might not, but I don’t think you speak for everyone.

Now I’m not one to keep score, but given I have a tiny following compared to the Twitter Goliath that is @piersmorgan I’d say the likes to my response to the Olympic naysayer Piers indicate that some people might actually be enjoying these games. pic.twitter.com/p43I5SxF54

For what it’s worth, it’s possible to be enjoying the Games while thinking they should have been further postponed

Match of the Day presenter and former England striker Lineker also got involved in the Olympics debate, especially on the topic of celebrating a bronze medal:

You’re wrong on this one. It’s exhilarating, uplifting and inspiring. Exactly what’s needed in these most depressing of times. https://t.co/Rv8nc3PyFn

To be in the top 3 in the entire world in your sport is an outstanding achievement. https://t.co/8QVTuHtWVX

True sporting greats like them would have the good grace to recognise the efforts of others and not disrespect them. https://t.co/mBdqMFqkAh

Rory McIlroy, who will represent Ireland in the Men's Olympic Golf Tournament this week, was not the most upbeat about being in Japan.

"I am doing it because I think it is the right thing to do," said McIlroy, who missed the Rio Games in 2016 due to fears over the Zika virus.

"I missed it last time and for golf to be an Olympic sport you need your best players there, and I feel like I want to represent the game of golf more than anything else.

"I don't know if there is much to look forward to, it is obviously going to be a very different environment."

Should the Olympics still be going ahead given the Covid pandemic? Do you care about the Olympic golf tournaments? Will you even be watching them? Share your thoughts over on our social media channels.