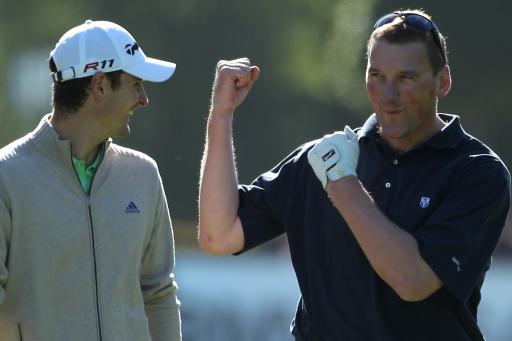 Sir Matthew Pinsent believes Justin Rose can prove the doubters wrong about golf in the Olympics.

The British Olympic legend and four-time gold medallist was introduced to golf by fellow rowing legend Sir Steve Redgrave back in 1990 and became president of the prestigious Stoke Park Golf & Country Club in Buckinghamshire in 2011.

Despite a host of big names including Jason Day, Dustin Johnson, Jordan Spieth and Rory McIlroy choosing to bypass golf's inclusion to the Olympics over concerns about the Zika virus, Pinsent has welcomed the return of the sport to the Rio showpiece.

Sir Matthew is pinning his hopes on a fellow Brit to strike gold to show that men's golf should view the Olympic tournament alongside the majors in the sport.

"I was always a fan of golf coming in," said Pinsent, who will officially step down as Stoke Park president later this year.

"All you need is a Justin Rose to win a gold medal for Team GB and say ‘this is up there with the best experience in golf'.

"He has already said how proud is to be representing Team GB, to be fair to him. And the rest of the team will embrace someone like him who gets involved.

"It's a unique experience to pull on an international shirt with the Olympic rings on it. It is totally different to anything else."

Although their competitive rowing days are behind them, the champion pairing of Pinsent and Redgrave still meet up regularly and feed their competitive instincts with their own private battles on the golf course.

"We always play for huge stakes but we never bother paying each other! I overtook him when I got my handicap down to 11 but I'm back up to 13 these days. He's alright, although he's got a bit of an old man swing. But we both love the game."

And after the duo did so much to portray the Olympics in such a positive light, Pinsent believes golf can do the same for a whole new generation in other parts of the world.

"Although the Olympics is incredibly strong in Europe, the Commonwealth and USA, it struggles in Africa, South America and Asia, to a great extent," he added.

"For example, the Olympics is tiny in India. They want to grow into areas where they are not as a strong, so golf is an interesting move.

"It's a relatively small number of golfers but they could spark a moment in Fiji, Indonesia or Japan - an area where they otherwise might not reach.

"It's a tactical thing. Yes, you can always look at whether the Olympics is the biggest thing in the sport and one of the hurdles golf now faces is that they suggested it would be the biggest thing in golf. But on the men's side, they have had some of the top players pull out.

"The women in golf have got no problem. All of their top players are going - it's men's golf that has got the problem at the moment."

Pinsent also drew comparisons with the reintroduction of tennis back in 1988, which has now developed and attracts all of the top players in the world.

He said: "Tennis was awful when it first came back in. The huge names of the sport didn't go.

"It's taken a while for it to grow but look at London when Andy Murray won and all of the top names were there.

"I don't think Andy stayed in the Olympic Village and nobody expects him to share a room with someone from modern pentathlon or anything like that. But he saw it as important and so does Justin Rose." Pinsent has been associated with Stoke Park since 2001 and has been impressed with the course changes undertaken over the winter during the final few months of his presidency.

He said: "It's been wonderful. It's a great honour to have been asked to be president of such a historic club.

"It's a fabulous place. The recent changes to the course are fantastic. I think it's testament to Chester and the whole King family. They are totally involved with the place and the level of investment they have put in is extraordinary under their ownership."

Will golf be a success at the 2016 Olympics or will it be a case of one and done? Will Justin Rose win the golf tournament in Rio? Share your thoughts in the forum or join the debate on Facebook, Twitter and Instagram pages.

sir matthew pinsent
Justin rose
golf in the olympics
rio olympics
pinsent tips rose to bloom at olympics
Previous
Which US PGA champion are you?
Next
Rory McIlroy column: Beyond the Valley