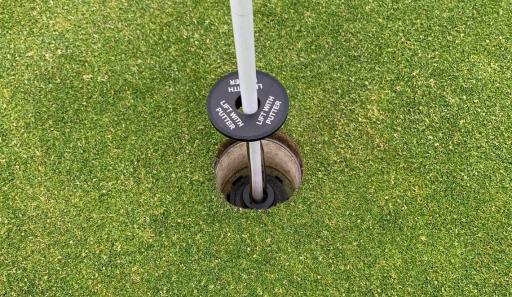 The R&A and USGA have today confirmed that if a golf ball hits a hole liner and it then bounces out of the cup that it DOES NOT count as being holed.

Jordan Spieth experienced this exact situation during a recent invatational event during lockdown when he sent his ball straight into the hole liner only for it to bounce out and end up in the water.

Spieth claimed it was a hole-in-one, while his playing partners told him to write down a five as that is the score he eventually made once taking his penalty stroke for finding the hazard.

Well Jordan, we can now confirm you will definitely need to take that ace off your tally.

If any of the following provisions are used, play in such circumstances is NOT in accordance with the Rules of Golf," reads the latest R&A report.

Golf's governing bodies clarified a number of other topics today as to whether a competition being run using temporary measures to help minimise exposing players to COVID-19 is being "played under the Rules of Golf".

The R&A's statement on its website read the following:

In response to the COVID-19 pandemic, both governing bodies have issued guidance so that Committees running golf competitions can better understand the options available under the Rules of Golf.

The R&A’s expanded guidance, which supplements the information contained in the Committee Procedures section of the “Official Guide to the Rules of Golf”, is outlined below. In relation to this guidance, it is important to note the following:

It is not the purpose of this communication to make recommendations or offer guidance in relation to the playing of golf at this time. Please refer to the appropriate body in your country for such guidance.

Scoring in Stroke Play (Rule 3.3b)

In view of concerns around handling and exchanging scorecards (which may be in paper or electronic form as already provided in the Rules), on a temporary basis, Committees may choose to allow methods of scoring in stroke play that do not strictly comply with Rule 3.3b or do not comply with the normal methods used under Rule 3.3b.

Committees may choose to adopt the following policies on a temporary basis:

Not have flagsticks at all.

- As a temporary provision, flagsticks can be used for the purpose of player safety which do not meet the specifications in Part 8 of the Equipment Rules. For example, a Committee may temporarily decide to use a flagstick that has an added movable platform or tray to help prevent touching the flagstick when removing the ball from the hole.
- Allow players to centre the flagstick in a safe manner which does not involve using the hand, even when wearing a glove or using a towel (for example, by using a club). The centring of the flagstick may be allowed while another player putts (this may be desirable in windy conditions when the flagstick is required to be left in the hole and is leaning towards the player making the stroke).

Hole and Definition of Holed

A method of inserting the hole liner may be used that means that all of the ball does not fall below the surface of the putting green and can be easily retrieved by handling the ball only.

But if any of the following provisions are used, play in such circumstances is not in accordance with the Rules of Golf:

If rakes have been removed from the course, or if the Committee has requested that rakes not be used, it is recognised that bunkers may not be smoothed as well as when there are rakes on the course.

This may not provide an ideal lie in a bunker, but coping with imperfect lies, whether in a bunker or elsewhere, is a normal part of the game.

But, if the Committee decides that, even with players making their best efforts to smooth the sand, the condition of the bunkers is likely to be so abnormal that it will be clearly unreasonable for players to play the ball as it lies, the Committee may use one of the following options:

- Change the status of the bunkers to be part of the general area and declare all of them to be ground under repair.
- Introduce preferred lies in bunkers, for example allowing a place in the bunker within one club-length not nearer to the hole than where the ball came to rest.

But if the following provision is used, play in such circumstances is not in accordance with the Rules of Golf:

- Allowing a ball to be lifted, the bunker to be smoothed and the ball to be replaced.

Note: A Committee should consult its handicapping authority for guidance on whether scores are acceptable for handicapping purposes.