Rory McIlroy is sticking with lifelong friend Harry Diamond as his caddie ahead of the Open Championship at Royal Portrush. 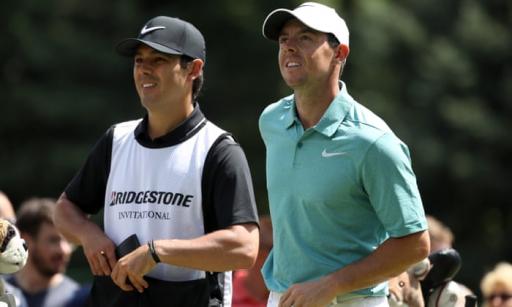 Jason Day recently persuaded Steve Williams, one of the most successful caddies every and formerly on the bag of Tiger Woods, to come out of retirement to help Day in his quest to win the U.S Open. Unfortunately for Day it didn't quite work out, but his decision to team up with Williams certainly became a talking point.

Day hasn't won a tournament for over a year and for a player of his quality, that statistic is disappointing to say the least. A lot of people praised Day for his decision to get Williams on his bag, a caddie who knows exactly how to get the job done at Pebble Beach. So should other big names in golf start changing their caddies to try and win more trophies? Perhaps attempt to lure more successful caddies to come out of retirement, like Jim 'Bones' Mackay who worked alongside Phil Mickelson for 25 years. Rory McIlory thinks not.

McIlory has had his good friend Harry Diamond on his bag for nearly two years now, as the four-time major champion feels his experience outweighs the need for an older caddie.

"Maybe back in the day when I wasn't as experienced, but I've been on tour for 12 years," McIlroy said.

"Caddies don't hit the shots. I want someone out there I'm comfortable with. That's the big thing for me and that’s why I have Harry on the bag."

McIlroy and Diamond will team up together again at next week's Scottish Open, soon followed by the 148th Open Championship at Royal Portrush, where McIlory holds the course record with an 11-under-par 61.

JP Fitzgerald was McIlroy's previous caddie, who was on his bag for all four of his major victories, the last dating back to 2014, but McIlory insists that Diamond, who represented Ireland as an amateur, brings extra qualities to the task.

"Having someone by your side that actually knows the game and knows how to play the game, and can sort of see different shots, and have a feeling of what way a ball's going to come out of a certain lie in the rough, all of that stuff (is an asset).

"Harry’s my best friend. We were best man at both of our weddings. I'm comfortable out there with him and feel like he does a better job.

"I don't envision a day where I go to a superstar caddie, or a well-known caddie. I just don’t think it's in my approach."