McIlroy eager to get himself in contention at the Scottish Open ahead of next week's Open Championship. 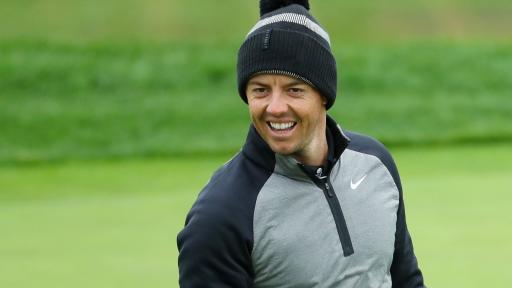 Rory McIlroy reportedly fired a 9-under 63 in the Queenwood Cup on Monday afternoon before heading off to compete in this week's Scottish Open at The Renaissance Club.

As first reported by National Club Golfer's Mark Townsend, the tweet claimed the Northern Irishman was 10-under par playing his final hole but clattered his approach into the flagstick and went on to make a closing bogey for a 63.

Nice nugget on Rory ahead of Portrush next week. Apparently he shot 63 today in the Queenwood Cup, Jon Rahm 67. Was -10 playing the 9th (his last) and approach hit the pin and rebounded 30 yards away. Made bogey..

McIlroy heads into this week's Scottish Open looking to continue a tremendous run of form into next week's Open Championship in front of his adoring home fans at Royal Portrush next week.

The Ulsterman starts a warm favourite for the European Tour event this week, and he would love nothing more than to win his third tournament of the year to give him the best possible confidence going into golf's final major of the year.

"The Scottish Open has always been one of the biggest events on the European Tour," said McIlroy.

"I remember my first Scottish Open in 2005 at Loch Lomond as an amateur. They were nice enough to give me an invite back then.

"This is my second in the last three years. Obviously I've one eye on The Open next week, but there a lot of ranking points on offer. I want a card in my hand, I want to win and it would be nice to add to my collection.

"I don't think there's a better way to prepare for a major than to get into contention the week before, it makes it so much easier if that happens again the following week. Hopefully I give myself a chance this week."