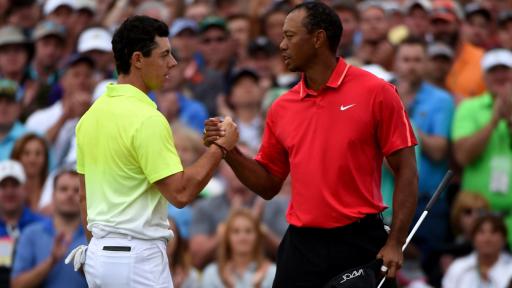 McIlroy, who starts pre-tournament favourite at the Memorial Tournament this week, considers Woods' total haul of victories as having the more lasting achievement in his legendary career no matter how many more major wins come the American's way.

"I think when you look at things today, it's more impressive than his major tally," said McIlroy, who landed his 15th career PGA Tour title with victory at The Players Championship at TPC Sawgrass in March.

"If you're around for 20 years, that's four a year, every year. It's very, very impressive. I think if you're winning multiple times a year, you're doing pretty well.

"I think with the way the game is going as well, I think you’re going to see guys have shorter careers if they want to.

"More money in the game, they’re coming out of school earlier. Yeah, I think that could definitely be a number that stands the test of time, for sure."

McIlroy's views are in stark contrast to that of 18-time major record holder Jack Nicklaus, who all but turned his nose away at the prospect of Woods surpassing Sam Snead's record of 82 PGA Tour wins.

"I don't pay any attention to that, that's not important to me," Nicklaus told the media during his own hosting of the Memorial Tournament at Muirfield Village.

"It might be to Tiger, I don't know, but they changed their mind every year about what they're going to count so I don't know what's what.

"No one in the world could know how many tournaments Sam Snead won."

Woods will look to tie Snead's record of PGA Tour wins this week, and he will fancy his chances of doing so having won a record five times at the Memorial Tournament, the last of which he won in 2012.

NEXT PAGE: JACK NICKLAUS CONSIDERS TIGER WOODS AS RED-HOT FAVOURITE FOR US OPEN