Garcia explains the reasons behind his SERIOUS MISCONDUCT DQ in Saudi Arabia... 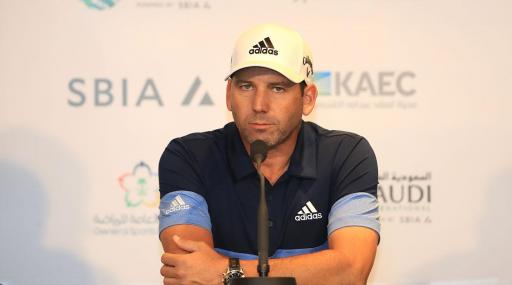 Sergio Garcia has revealed how personal issues played a role in his shocking outburst where he damaged five greens during round three of the Saudi International.

Garcia, who also lost the plot in the sand on day two (watch here), was disqualified by the European Tour on the third day for his actions on the greens under a breach of 'serious misconduct'.

"I received some very emotional, personal news earlier that week that didn’t help," Garcia told the press ahead of this week's Genesis Open.

"It was in the back of my mind. As I became frustrated on the course everything erupted,” Garcia told Golf Channel’s Todd Lewis on Wednesday ahead of the Genesis Open.

"It was a mix of some emotional and personal things going on and a little frustration with the greens."

Garcia also spoke about the comments he's received from fellow players on the European Tour of the matter, in particular that of Brooks Koepka who explained the Spaniard acted "like a child."

"I’m sure some of them aren’t going to be happy about it,"  said Garcia.

"We all make mistakes and I’m the first to admit it. The only thing I can do is apologise. I’m going to work hard to behave the best way possible. Show everyone that not only am I a good golfer, I’m a good person."

Garcia has typically been regarded as a hot-head golfer down the years - most notably once throwing his golf shoe into the crowd and hurling a golf club into a lake - but he admits his latest meltdown will not happen again.

"It’s not going to happen [again]. I’m going to make sure that doesn’t happen. I’m going to work really, really hard that those downs don’t get to that point.”

Golfer FALLS INTO LAKE after playing recovery shot!
Golfer shoots 59 then jumps straight into the lake
Previous
Tommy Fleetwood using $13 putter at Genesis Open
Next
Golf pro records a 17 on ONE HOLE during Tour debut!