David Ortiz says he will NOT work for Kuchar at next year's tournament, despite their win together... 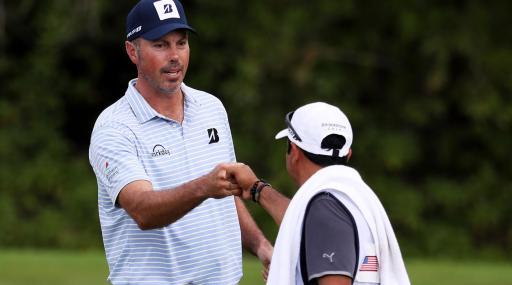 Matt Kuchar is regarded by many as one of the nice guys on the PGA Tour, but as more and more reports emerge from his stand-in caddie controversy en route to winning the Mayakoba Golf Classic last November, that sentiment would now appear to be steadily dwindling by the second.

Kuchar - whose career earnings fall just shy of $50 million - called in the services of diminutive Mexican caddie David Ortiz before playing in the Mayakoba Golf Classic, which he duly went on to win by one stroke to land a pay cheque in the region of $1.3 million.

According to a recent phone interview conducted by Golf.com, Ortiz, 40, revealed he was paid $5,000 by Kuchar on the Sunday evening of their victory on November 11, but no other payment.

Several weeks ago, Kuchar told the media how he paid his stand-in looper more than the $3,000 that had initially been reported.

It is typically expected a caddie receives 10% of a player's winnings, but Ortiz knew he wasn't in the running for that as he was standing in for Kuchar's regular caddie. Ortiz did, however, expect a little more gratitude for his efforts over the 72 holes.

The caddie said he was offered an additional $15,000, for a total of $20,000, but that he found that unacceptable. He also said he would not want to work for Kuchar at next year’s tournament.

According to reports, Ortiz sent an email to Kuchar's agent Mark Steinberg which stated: "I am a humble man, who takes care of his family, and works hard. I am reaching out to you to see if you can facilitate me receiving a fair amount for my help with Matt winning $1,296,000. I am not looking to disparage Matt or give him a bad name. Fair is fair, and I feel like I was taken advantage of by placing my trust in Matt."

Upon learning he would receive an additional $15,000 on top of the $5,000 he was initially paid by Kuchar, Ortiz apparently said: "No thank you, they can keep their money."

Steinberg, who also represents Tiger Woods and Justin Rose, has since told Golf.com: "The reports [sic] on what Matt’s caddie was offered are wildly inaccurate. However, it is inappropriate to discuss those amounts publicly."