NBA star is teeing it up on the web.com Tour this week. 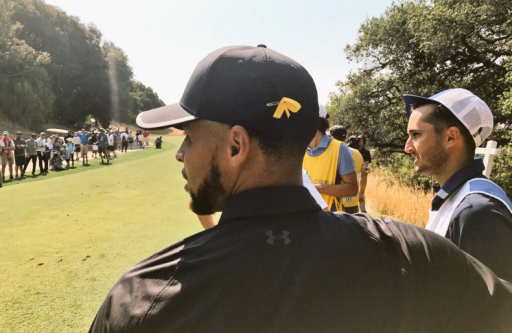 NBA megastar Stephen Curry teed it up on the Web.com Tour yesterday posting an impressive round of 71, one over.

The Golden State Warrior’s three-time NBA Champion competed in the Ellie Mae Classic, a year after making his debut at the event with rounds of 74 and 74.

“Awesome day,” Curry said. “I hit fairways, which for me has been the struggle the (first) five nines I’ve played.

“Hitting out of the rough all the time and scrambling puts a lot of stress on yourself. A couple putts went in and the shot on 17 was pretty cool. An inch away from dunking it. I don’t get many dunks so that was pretty cool.”

The two-time MVP struggled early on, slipping to four-over through 11 holes, but managed to birdie three of his last seven.

“It was fun. I was still nervous, had the same jitters on the first tee This time it took me to hole eight or nine to get comfortable. You can’t simulate that pressure standing over eight, 10-foot putts. But once you get in a groove, great things happen,” he said.

“The turning point today was on two green (his 11th hole) and I three putted and was four over. I could have gone in the trash can. To be able to reel myself back in was fun.”

Unless he goes low today, Curry is unlikely to make the cut.

“Be as good as you look!” @warriors guard @StephenCurry30’s approach on No. 8 Thursday @elliemaeclassic was indeed that good. pic.twitter.com/hG2CAA1bR0

Are you kidding me?! @StephenCurry30 is knocking down pins at the @EllieMaeClassic. pic.twitter.com/4NQEHqSHg2