Steve Stricker captured the 2019 U.S Senior Open in phenomenal style to win his second senior major, but his choice of irons surprised a few people. 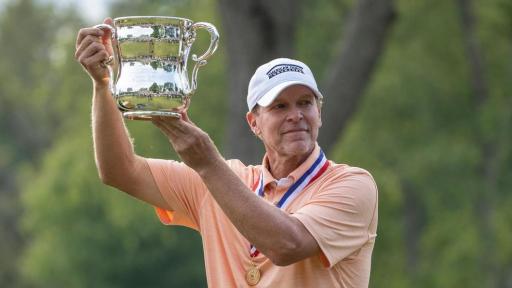 Steve Stricker never won a major during his days playing on the PGA Tour, but it's a different story on the senior Tour. Stricker won the 2019 U.S Senior Open at Warren Golf Course, with a fantastic display to win his second senior major of the season. What surprised a few people, was his choice of irons, that were first released in 2006.

After losing to Jerry Kelly in a playoff recently, Stricker wasn't in the best of moods and only had one thing on his mind for the U.S Senior Open and that was taking home the trophy.

Stricker did just that and in some style too, smashingthe field by six shots to finish the tournament 19-under par, tying the largest margin of victory in the history of the tournament and falling just one shot short of Fred Funk's lowest 72-hole score, when he shot 20 under in 2009 at Crooked Stick.

With the biggest brands in golf constantly bringing out new technology in their latest clubs, it came to a bit of a surprise to see Stricker using a set of irons that were first released in 2006.

The Titleist 755 Forged irons found their way back into Stricker's bag for the Memorial Tournament earlier this month and are the same irons Stricker used to end a six-year winless drought back in 2007. He then went on to win five times in two and a half years using the 755 Forged irons.

Stricker then changed his irons a few times and won his first Champions Tour major using the Titleist 718 AP2's, but something didn't feel quite right in his swing so went back to his old irons and it's clearly worked for him, as Stricker put together a stunning iron display during his U.S Senior Open win.

It makes you wonder if all the new technology in golf is worth the big price, after all, 'if it ain't broke, don't fix it' right...?