WATCH: Tiger Woods meets up with the rising English sensation who shares his famous nickname. 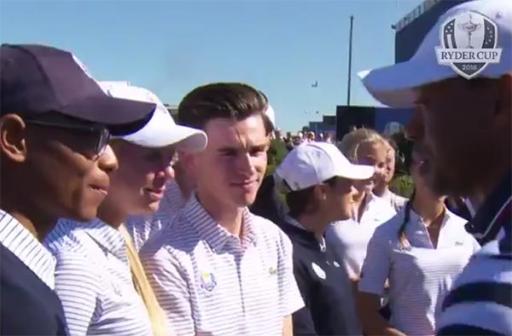 Tiger Woods thrilled members of the Junior Ryder Cup teams by meeting them on Wednesday, but none were more overwhelmed than a rising English superstar who shares his famous nickname.

Robin "Tiger" Williams, who went 2-1 in Europe's narrow one-point defeat at the hands of the United States on Wednesday, got to meet the man who has helped shape his blooming golf career.

Williams was a little nervous telling Woods about his 'Tiger' connection, but once someone else brought it up, Woods perked up and said 'C'mon dude, is it really?! Good for you!" Watch the clip below...

Williams played in last year's British Masters on the European Tour as a 16-year-old, the same age Woods made his PGA Tour debut at the 1992 Nissan Los Angeles Open.