Tiger Woods continues his winning streak, then cheekily says: "Does this count as 83?" 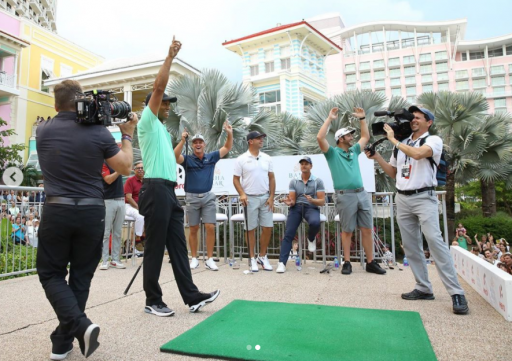 Tiger Woods was crowned winner of the inaugural Hero Shot at Baha Mar with an incredible walk-off bullseye shot to defeat Jordan Spieth in the final.

The players were required to hit wedge shots from off a mat at Baha Mar at a floating target positioned 130 yards away.

Check out this epic video of Woods hitting the winning shot, with a club twirl in the process...

Sealing the victory in style.

The winner of the 2019 Hero Shot at Baha Mar, @TigerWoods! pic.twitter.com/T0K9rXbxfu

Woods then took to social media to gloat about his Hero Shot victory, thanking the players for coming to take part in the first-ever Hero Shot at Baha Mar, before finishing with: "Does this count as 83?"

One golf fan commented: "That club twirl got my girl pregnant."

Another fan wrote: "Been on repeat since it was posted. Nothing else matters."

Others said: "You can tell by Jordan's reaction this year could be more than 2 tourneys won by el tigre."

Woods is hosting this week's annual Hero World Challenge in the Bahamas.

He is making his first competitive start since winning his 82nd PGA Tour title at the ZOZO Championship in Japan.

Woods recently revealed he will be bringing out his first memoir titled 'BACK' in the near future, a book that will go into details about what he considers many "errors and speculation" about his career both on and off the course.

NEXT PAGE: TIGER TO REVEAL NEW MEMOIR TITLED BACK