Tiger Woods withdraws with back injury in Dubai

Mark Steinberg says Tiger Woods withdraws due to a lower back spasm. 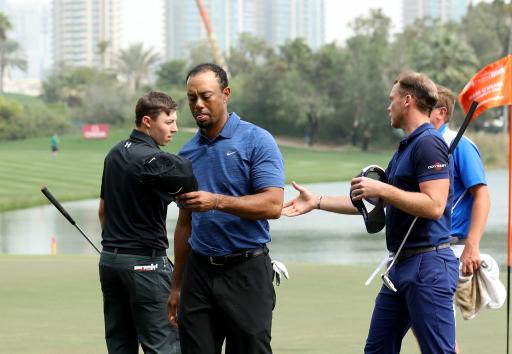 Tiger Woods has withdrawn from the Dubai Desert Classic an hour before starting his second round.

The 14-time major champion opened with a dismal 5-over 77 on Thursday but after the round explained he was in "no pain at all".

Woods' agent Mark Steinberg said he had withdrawn because of a lower back spasm that started late Thursday after dinner.

"Tried to work it out last night, didn’t really get it worked out," said Steinberg.

"Had treatment starting pretty early this morning. He can move around, he can’t make a full rotation on the swing."

Prior to the start of the tournament, Woods said his new swing was designed to "play away from pain."

The most interesting part of the interview was when Steinberg was questioned by a reporter for the name of Woods' trainer, to which he terminated the interview and walked off.

Woods is scheduled to play in the Genesis Open and Honda Classic on the PGA Tour later this month.

What do you make of Woods' latest withdrawal? Share your thoughts in the forum or join us on social media.